Thanks for having me on your blog today!

There are several big themes in my new book from Samhain Publishing, Making Sense.

One is the ‘one-night stand turns to more’ contemporary romance theme, which follows the journey of Nate and Freya as they struggle to pretend they’re just having a fling when it’s quite clear it’s a lot more serious than that.

Another theme revolves around the supernatural talent that all the heroes in my Sensual Healing series have. In An Uncommon Sense, the hero is a medium, and in Making Sense Nate is a healer. I’m fascinated by psychic abilities and thought it would be interesting to have a hero who’s a healer, and what happens when he hooks up with the heroine, Freya, who’s a nurse. Freya’s able to help him understand what healing is really all about, while he shows her how she’s doing so much more than merely changing beds and bandages.

The third theme in the book is music. Nate plays the guitar in a band at a local bar, and later on in the book he also plays at a vineyard during a wine festival. The story is setting during a humid New Zealand summer, and that hazy, folksy jazz feel weaves through the whole story.

Here’s a clip from the moment in the vineyard when Nate gets up to sing. Freya wants to just sit and listen, but another man asks her to dance. She and Nate aren’t supposed to be serious anyway, so she figures it can’t hurt to say yes. Will Nate even notice?

“Oh, that’s me,” Nate said suddenly as someone called for the next band over the loudspeaker. “Wish me luck.”
“Good luck!” everyone called, and he smiled, glancing across the table, his gaze resting on Freya briefly before he turned to walk up to the stage. She watched him leap nimbly up onto the makeshift platform and pick up his guitar, pulling the strap over his head. He walked to the front, lifting the microphone up, and they all cheered as he waved, waiting for the rest of the band to take their places.
They went straight into a song that Freya didn’t know, some slow bluesy number, and she leaned her head on her hand as his deep, mellow voice rolled over her. He was so sexy. The blue shirt really suited him, and the curling tattoo that wound around his left arm gave him an edge that made her shiver. In spite of the fact that he’d relaxed a little, he was still dark and brooding, a regular Heathcliff, and she melted as he held a long note that sent tiny electric shocks right up her spine.
A shadow fell over her, and she looked up to see Kyle, an Aussie teacher from Grace and Mia’s school, standing in front of her, smiling. “Wanna dance?” he asked, holding out his hand.
Freya hesitated. He’d talked to her several times that afternoon, clearly interested in her, and she hadn’t rebutted his attention, ashamed that she wanted to prove to Nate that other men found her attractive. Now she felt a twinge of irritation, wishing she could continue to sit and watch Nate singing. But she was too well brought up to turn down any guy brave enough to ask her to dance, so she smiled and stood, taking his hand and letting him lead her forward to the space in front of the stage, already occupied by a dozen or so couples.
Kyle turned her, keeping hold of her right hand, sliding his other hand around her waist. She smiled up at him, putting her hand on his shoulder. He was pleasant enough, maybe an inch shy of six foot, brown haired and fairly good looking. “Enjoying yourself?” he asked her, raising his voice over the music.
“Yes thanks, I’m having a great time.”
“Great to try all the wines,” he said, pulling her a bit closer, ostensibly so he didn’t have to shout quite so loud, but probably, she thought, so he could slide his hand surreptitiously onto her butt. He carried on talking about something to do with the different Merlots he’d tried, but Freya wasn’t really listening. Her gaze crept up to Nate as they turned slowly to the music, and she wondered whether he’d even noticed her dancing with Kyle.
Oh, he’d noticed, if his hot, amused glare was anything to go by. Still strumming the guitar, he raised an eyebrow at her, glancing down at Kyle’s hand on her backside. Her lips curved, and she looked away, trying not laugh. She was tempted to leave Kyle’s hand there, just to torture Nate, but the Aussie’s hand was beginning to squeeze as well as linger, so she lifted it up to her waist, moving back a few inches from him to make it clear she wasn’t interested in taking it any further.
They danced until the end of the song, and then she excused herself, going back to her seat and pouring another glass of wine. Nate continued with another ballad, glancing over as he sang about a girl who applied her makeup as she brushed her long blonde hair, and her cheeks grew warm. He hadn’t done that, surely. He hadn’t just dedicated a song to her. Flustered, she got up and wandered over to talk to Grace where she was catching up with a few friends, and joined in with the conversation for a while. She noticed when he finished his last song, however, and she clapped with the rest of them as he jumped down from the stage and headed back to the table.
It was late afternoon by now, and the wine had started to have an effect on everyone, with laughter rolling between the tables and more and more people heading for the dance floor. The heavy, humid air caused the occasional bead of sweat to slide between her breasts, and she knew her skin would be flushed from standing out in the sun while waiting at some of the stalls. Stray strands of her hair had fallen from the knot and clung to her damp skin, and the wine made her feel light-headed.
“I’m going to get a bottle of water,” she said to Grace, leaving the girls and walking over to their table. Nate sat at the end, legs stretched out, and she skirted him, intending to get the wallet from her handbag. As she passed him, however, he reached out and grabbed her hand, and before she could protest, or say anything for that matter, he pulled her onto his lap, slipped his hand behind her head, and pulled her down for a kiss. 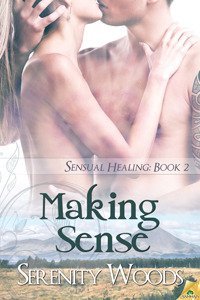 One night can loosen the grip of the past. Only love can break it completely.

Freya Fletcher longs to travel and use her nursing skills abroad. But while her father keeps gambling away her meager savings, she’s anchored to her hospital job and family responsibilities.

When friends ask her to a bar one evening to support a local band, Freya goes along reluctantly. But she’s glad she took the night off when gorgeous Nate Taylor turns out to be the lead guitarist and singer. Too bad there’s no room in her complicated life for anything resembling love.

Following a car accident at age fourteen, Nate awoke with an ability to heal. Now, hounded by the family that used him, haunted by the memory of a boy he couldn’t save, he is a man on the run. Although the promise of peace glows brightly in Freya’s beautiful eyes, his past, weighing heavily on his soul, won’t let him reach for it.

Luckily, the delectable Freya doesn’t want a relationship either. They come together for one night, just casual, no strings. But one night quickly turns into several. Before long they’ve fallen in love, but until they can find a way to break free of their pasts, a happy future will remain only a distant dream.

Product Warnings
An unashamedly romantic and sexy story guaranteed to make you laugh and cry. Please do not read unless you like brooding heroes, fun and feisty heroines, and a touch of the Twilight Zone

12/3 – The Muse Unleashed and Guilty Pleasures

12/7 – Seductive Musings and Musings From An Addicted Reader

Serenity Woods lives in the sub-tropical Northland of New Zealand with her wonderful husband and gorgeous teenage son. She writes fun, flirty, and sexy romances in a variety of romantic sub-genres. She’s won several writing competitions and is a member of the Romance Writers of New Zealand. She would much rather immerse herself in reading or writing romance than do the dusting and ironing, which is why it’s not a great idea to pop round if you have any allergies.

Serenity is giving away one of her back list (winners choice) TODAY. Comment below to enter.
She will also be doing a Grand Prize, $20 Amazon or B&N gift card, at the end of the tour, winner will be selected from all of the commenters throughout the tour.

Thanks for the excerpt! I need to read both books in this series:)

Great excerpt! I would love to read Making Sense.

Love the excerpt, =) can´t wait for my chance to read,

Thanks for the great excerpt. This book sounds fantastic. Can’t wait to read it.

Thanks for the excerpt, haven’t read your books before, will have to check it out.

Sounds fantastic! Congrats to Serenity on the new release! Thanks for sharing!

I love the sound of this book-thanks for sharing the excerpt!