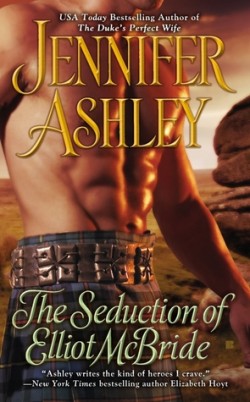 The Seduction of Elliot McBride
by Jennifer Ashley

“I felt that Ashley penned an exciting and heartfelt story for Elliot.” ~Under the Covers

It is Juliana St. John’s wedding day; however, the man she marries is not he man on her guests invitations. After being jilted at the altar by her intended grom, the very proper and strait laiced Juliana makes a proposition to the man she has loved since she was sixteen but never expected to marry, the very mad Elliot McBride. Elliot never expected he would have his dream land in his lap and offer him heaven, but when Juliana asks him to marry her he snatches at the chance to have the girl he has loved since her was sixteen, the mere memory of her enough to sustain him through torture and madness.

Suz: So, Annie, you tempted and teased me with this book until I was forced to read it and find out what you were swooning about! And I confess, it was quite swoonable, Jennifer Ashley seems to excel with writing fucked up heroes, Elliot was delicious, ALTHOUGH I dispute that he was better then either Ian or Hart, what made you love this Highlander more then the others?

Annie: To be honest, I worried that Elliot wouldn’t live up to the brothers going into this book, but Ashley had a great story planned for Elliot and right when I started this book, I knew there was more to Elliot McBride than what she initially let on. I loved how dark and uncontrollable he was, but that he also had something that grounded him. Learning about his last broke my heart but in a way that didn’t make me feel completely sorry for him to the point where I only sympathize with his past and not him as a character now. But what did you think of Juliana, do you think she was as good as the other heroines in this series?

Suz: Yes she certainly did the dark and tortured past really well, but she has done that in every single one of her books, she must be quite practised at it by now! It would be nice to have a hero that was a little different; not that I didn’t love Elliot, just that I was hoping for something new. As for Juliana, I sound so negative about this books when I did like it, I didn’t think she was as good as the other heroines; she was a little forgettable and I don’t feel like I ever really got to know her, I think she got a little bit over shadowed by Elliot, her strengths never seemed to come through. What do you think?

Annie: Yes! I agree! Though there isn’t anything I can pinpoint that I hated about her, I did feel as if she was overwhelmed by Elliot. He is such a strong character and I liked the way Ashley displayed their relationship and HOW they came to trust each other, but I don’t feel like we got a chance to really know more about Juliana other than that she likes to make lists. She was enjoyable, but I wanted more!

Suz: I am glad I am not the only who though that! One thing I did enjoy about this was the glimpse of the Mackenzies (although I wanted more of them!) and the small little secondary romances going on in the background, it was all kind of sweet.But it was strange both the best and worst thing about this book was Elliot McBride, he was such a vivid character that he drowned out everything else, the other characters including Juliana and the very small intrigue plot that Ms Ashley had constructed. Although the sex scenes…….was it me or did Elliot give oral like a god? LOL!

Annie: Lmao! Oh my god, he did!!!!!! Hence the reason why I swiftly snatched him before you could claim him for your harem! Ok, so what did you think of the progression of this book? For me, some parts held my attention more than others. Pacing was good. Writing was great! And I liked the way she was able to top off each chapter with a killer ending. It made me want to continue reading until there was nothing left to devour!

Suz: Yes well, you may have Elliot but I still have the lovely Ian and Hart in my harem so I am perfectly happy! I agree to a certain extent about the pacing, but some of it did seem like it was just for padding, there wasn’t really that much there to drive the story forward, they just meandered along waiting for the next crazy thing Elliot would do. But I agree that the writing was great, annnnnd I am left thinking Daniel Mackenzie is going to be joining his uncles in my harem, and surprisingly so is Inspector Fellows! I hope she does a book or atleast a novella for him. So are you looking forward to Daniel’s book? I kind of fear for Daniel’s health she does like to torture her heroes!

Annie: I’m very interested to see what she has in store for Daniel!!! I wonder how he will match against his uncles? And you can’t start laying claim already!!! It’s too early and your harem is full! ;P unless you’d like to pass on Hart to me, I’d be okay with that!

Suz: I think he will be more then a match and I can’t wait to find out! So how many feathers would you rate this book? I am thinking 3.5 feathers, although I did like it, it didn’t have that extra oompf that I associate with 5 feather books, the heroine didn’t have enough presense and I felt that the love story wasn’t engaging enough between Elliot and Juliana to support the book without a really good subplot which this sadly lacked for me.

Annie: I think I enjoyed it considerably more. While the pacing is ok and Juliana was overshadowed a bit by Elliot, I felt that Ashley penned an exciting and heartfelt story for Elliot. I loved that Juliana showed how willing she was to trust him when everyone saw him only as mad. I would give this book 4.5 feathers.

Great review and post. I’ve been waiting for this book. I LOVE this series.

Interview and Giveaway with Jennifer Ashley | Under the Covers Book Blog