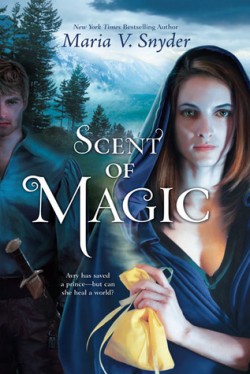 I liked that she [Maria V Snyder] has created a genuinely strong female lead who manages to not only save herself most the time, but to protect the people around her; too often supposedly “strong” female characters still need the male to come along and save the day. ~ Under the Covers

Avry is the last Healer in the Fifteen Realms, making her valuable to friends and enemies alike, but with the exception of the man she loves, Kerrick, they all think she’s dead. But the insane King Tohon grows more powerful, especially as he can command an army of the dead and Avry must come out of hiding and do all she can to help stop him despite her fear of him. Meanwhile rumours of another invasion abound and Kerrick must return home and do all he can to stop it, leaving Avry all alone…

In Touch of Power the first book in this series, I remember it being very similar, too similar, to her Study series, the characters and the story were too close and although I enjoyed it I was a little disappointed. However, I am glad I carried on reading as although the similarities are still there Scent of Magic seemed to breakaway and form its own identity.

What I really enjoyed about this book was the story, Touch of Power was just a warm up to get to the real action in this book, I found couldn’t wait to see what would happen next and what the characters would do as war starts to break on the Fifteen Realms. What was also great was the characters, especially Avry, I liked that she has created a genuinely strong female lead who manages to not only save herself most the time, but to protect the people around her, too often supposedly “strong” female characters still need the male to come along and save the day.

This book also switched POVs from Avry to Kerrick, and although it was essential and interesting to see what was happening on the other side of the Kingdom, I felt that it switched over far too often. You would just be getting into what was happening with Kerrick and then it would go back to Avry and although I feel the switched POVS did add to the story, it was frustrating as they felt so short.

I really liked this book and am really getting into this series, it has all the things I love about books, fantasy in particular, adventure, magic, great storytelling and romance. I can’t wait to read what happens next!

Thanks for the review! This is a new to me author and I’m definitely going to go check out her book 1 🙂

Thank you, enjoyed your review.
Z

Thanks for the review. This is a new author to me.

I saw this book for the first time yesterday and I wanted it, I read your review and I want it even more now!

Suz, I haven’t ever heard of this series, so thanks for featuring it. This sounds like a good series to look into.

I love a good a good fansty, will have to check it out.

I love the blurb for your book it sounds really good.