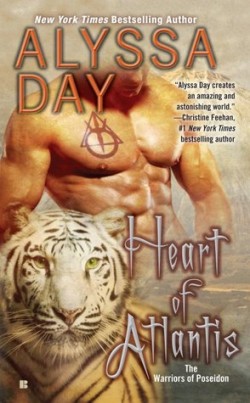 Heart of Atlantis
by alyssa day

This book felt larger than life ~ Under the Covers

Poseidon’s High Priest finally has his book! Readers have been interested in Alaric since he was introduced to the books early in the series. As a man who is devoted and stays true to his words, his loyalty is earned, not freely given. But the spunky rebel leader named Quinn shows just how worthy she is of his love through her actions and her words.

When Jack, a shifter who is also Quinn’s best friend is badly injured, Quinn asks Alaric to help him before his lifeforce is fully drained. Alaric knows he will do anything for Quinn, but he has always harbored some hostility and jealously towards Jack because of his closeness with Quinn. What will happen when he heals Jack? Will he lose the one woman he has loved to him?

HEART OF ATLANTIS brings readers back into a world that is brimming with mythology and history. Vast in its intensely complicated worldbuilding, Day has already created and cemented this unique world throughout the series and in this book, she really plays around with it. Readers are thrust into exotic locales filled with danger and intrigue. This book felt larger than life and I love that that sense of epic grandness was played up.

In terms of the romance, I was a little conflicted. Many readers will whoop with joy when they find out that Quinn and Alaric do end up together because Day has so expertly teased us with them in the past. However, I do think the author took those feelings of excitement for granted a little bit. Most of the book centers on the fact that Alaric has a vow of celibacy. If he gives in, there is a great possibility that he could lose his magic. As the main conflict in the relationship, I wished that Day had really spent more time on the romance and building that relationship more, rather than making it about whether they will or will not do it to risk his loss of powers.

I liked that Day played up the importance of Quinn’s relationship with Jack. It just added another layer of the story that fit will with the characters and the storyline. This series has developed well over the course of its run and I think readers will be excited to finally read about Alaric and Quinn. Their story is long due.

This sounds great Ann! Thanks for reviewing, I saw that this is coming out on audio, I’m so glad I don’t have to buy it on the blind.
As usual, great job!

Thanks babe! Let me know what you think when you’re done listening!!

Thanks for the review! This is one of those series that I keep telling myself to start. Definitely going to have to get my booty in gear!

I haven’t started this series yet but I’ve heard great things about it…maybe I’ll do it in audio….
Thanks for the review

I haven’t read this series as yet…adding to my wishlist!

I have the book and now after reading the review, I can’t wait to start it! I hope I feel better for the romance then you did.

Haven’t read this series yet, going to add to the TBR list now, sooooooo many book, so little time 🙂

Thanks for the review. The book sounds good.

Another great series I’ve never heard of. I think I need to remedy that ASAP!

I have read only the first in the series, but have several in the TBR pile. I need more time, people! Too many great series out there that I want to start and this is one of them.
Great post!

Thanks for the review. This series in one I haven’t started yet but I put it at the top of by TBR pile today. Will start it this weekend.