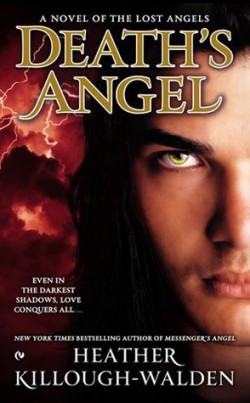 There were many things I really liked about Death’s Angel but unfortunately there were some aspects of it that had me pulling my hair out. ~ Under the Covers

Azreal, the once fearsome Archangel of Death, and now vampire has been looking for his archess for over 2000 years. His brothers Uriel and Gabriel found their archesses’ in quick succession and now only Az and their leader Michael remain without theirs. But when Az see’s Sophie Bryce for the first time he knows he has found the other half of his soul, he just needs to persuade her of that and gain her trust. But, it seems that suddenly it isn’t just archesses being revealed, but many paranormal creatures are coming out of hiding and back into the mortal round, but for what purpose, and what new enemy is now stalking the favoured four archangels?

Gah! I found this book so hard to write a review for and even harder to give an accurate rating. There were many things I really liked about <i>Death’s Angel</i> but unfortunately there were some aspects of it that had me pulling my hair out.

But lets start on a positive note, when I first started reading it completely captivated me, although I haven’t read the previous books in this series it was easy to follow the main story arc. I did think Az had his little oh-woe-is-me-i-am-lord-of-the-night goth teenage girl moments but I liked him and I loved seeing him trying to court Sophie and gain her trust rather then just pouncing.

What started to eat away at my enjoyment was how long it seemed, there was a lot of internal monologuing and not enough romancing and it made it seem like the book went on forever, by the end I sighed with relieve as it was finally over. I don’t think it was over long, I think it was a combination of the writing style which reminded me of Christine Feehan, which means it was a little over blown, wordsy and melodramatic which slowed down the pace of the story.

But, I am still contemplating reading the next one in the series as it ended on such a good cliffhanger, and I may even read the previous books…just not for a while.

Thanks Suz for the review.

I love this cover!