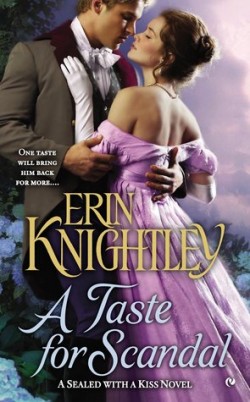 A Taste for Scandal
by Erin Knightley

With endearing characters, eloquent writing and a spoonful of charm, you’ve got the perfect recipe for the perfect read! ~ Under the Covers

Richard Moore, Earl of Raleigh is no stranger to a life of scandal and carnal pleasures. He indulges often and isn’t afraid to use his charm to get what he wants. However, life has seemed rather dull lately and it isn’t until he attempts to be a hero that things go terribly wrong for him. A shrill shriek catches his attention and when his eyes land on a large, roughened man and a wide-eyed woman, Richard reacts impulsively and tackles the man to the ground to prevent him from hurting the poor lady.

Soon he finds that the lady was in fact not in any sort of trouble, but simply very excited to see his cousin. Worse yet is the fact that the lady he has attempted to save is now blaming him for the damaged done to her shop as he fought the man. Now, it seems that Richard cannot complain of his life being uneventful as the beauty pointing her dainty little finger at him both infuriates and intrigues him. Richard makes it his next goal to learn more about Jane Bunting.

Erin Knightley delivers a splendid sequel to the Sealed with a Kiss series. I was ecstatic to learn that Richard was getting a book next. He made such an impression in the first book that I just had to know what would happen to him. Knightley creates a charming story for Jane and Richard that I couldn’t help but smile and even laugh out loud at some scenes. This is partly due to the mess that Richard and Jane get themselves into and also partly due to the way Knightley writes her books. She has a very strong voice that I think is very unique and reminiscence of historical heavy-hitters such as Lisa Kleypas, Julia Quinn, Suzanne Enoch and even a bit of Tessa Dare. The whole book is infused with charm and crazy antics that made it so easy to sink deeply into this world.

Added to that is the fact that Knightley writes strong bonds between the siblings. Beatrice is a major part of this book and I think that this creates a lot of anticipation for the next book in the series where readers will see Beatrice get her own story told. As layers are built upon more layers, Knightley is creating a nice little niche of characters that I think readers will find endearing and fun.

In this book, the magic really happens in the kitchen when Richard learns how to bake from Jane. As they made progress with each dish, the sexual tension boils to a fevering point and I think the romance was really well done. I do think that the ending progressed a little too quickly for my taste, however, there is no doubt that Jane and Richard have enough chemistry to fuel a fire.

I can’t wait to read Beatrice’s book next! This is a new series that I’m glad I’ve discovered. With endearing characters, eloquent writing and a spoonful of charm, you’ve got the perfect recipe for the perfect read!

Thanks Ann, I love a good historical read, will have to check it out.

Thank you for the review. I’m glad that you like the series as well. Can’t wait to read this story.

Thanks for the review! I have Erin’s first book. I don’t know why I haven’t read it yet… hmmm… gonna go find it and get started 🙂

Poor guy, he doesn’t seem to know what hit him at first 😀 thanks for the rec.

LOL he`s a sweet guy though!

Thanks for the review. I love reading historicals. This book sounds fantastic.

Thanks for the review the book sounds great. I love historically.

I haven’t read anything by this author as yet but this book sounds really good…thanks Ann for the recommendation!