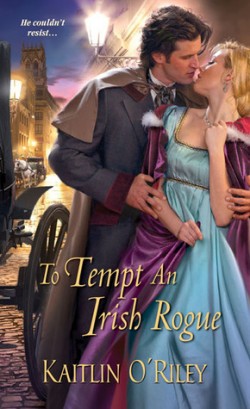 To Tempt an Irish Rogue
by Kaitlin O'Riley

“Thank you Kaitlin O’Riley for making my TBR pile grow.” ~Under the Covers

Declan Reeves has left Dublin, Ireland in hopes that his four year old daughter, Mara will overcome the terror of seeing her mother die in a fire. Many believe Declan, Lord Cashelmore, has fled Dublin because he murdered his wife. You see, Declan and his deceased wife Margaret did not have a perfect marriage. Wed very young, Declan believed himself in love with the petulant Margaret, but things deteriorated after Mara’s birth. Now the handsome young widower is under suspicion for the deadly fire that took Margaret’s life and almost took his beloved daughter from him as well.

Now in London with Mara, who hasn’t spoken a word since her mother’s death almost a year before, Declan enters Hamilton’s Book Shoppe, and into the sights of Paulette Hamilton, one of the proprietors of the book store. When Paulette so kindly helps Declan and Mara find a book for the four year old, Declan finds himself attracted to the pretty young blonde.Attracted so much so, that Declan can’t seem to stay away from Hamilton’s Book Shoppe and Paulette, even though he vows never to marry again.

At first, Paulette, the fourth or five sisters, is of the same manner of thinking as Declan. Paulette, who has never had a suitor is not sure she will ever marry, but when she meets the handsome Lord, she finds the institution of marriage not so far-fetched. All of Paulette’s elder sisters are happily married leaving the youngest, Yvette, waiting for her older sister to find a man.

When Declan’s troubles in Ireland find him in London, he realizes he needs to protect Paulette as well as Mara from danger. Someone really wants Declan to go down for Margaret’s death, but is it Margaret’s family who are gunning for him to swing from a hangman’s noose, or one of his own family members? You will find out once you pick up To Tempt An Irish Rogue by Kaitlin O’Riley.

To Tempt An Irish Rogue, the fourth book in the Hamilton Sisters series was my first venture into Ms. Kaitlin O’Riley’s works, and I was pleasantly surprised. Sometimes when you pick up a later book in a series and read out of sequence, the reader is lost. Not so with this book. I really enjoyed how the author brought the previous character’s stories into play without over-explanation or rhetoric. I came to like all of the Hamilton sisters and will be reading the previous books in the series soon. So thank you Kaitlin O’Riley for making my TBR pile grow.

I love the sound of this book. Thanks for the review.

Sounds great, jumping on to Amazon now to have a look.

Sounds like a really sweet book…will have to read. Thank you!!

Sounds like a great read, I’ll have to check out this series.