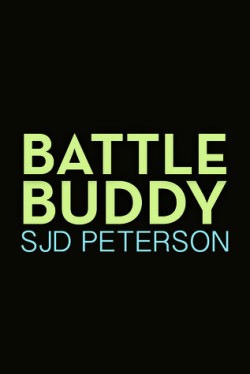 “Not many people are gifted enough to write a novella that is as fulfilling as Battle Buddy, but Peterson does it.” ~ Under the Covers

Mmmmmm….I LOVE me some military men.  So what do you get when you put together TWO uber-hawt military men???  One VERY happy, happy reader!

Battle Buddy is the story of Shane Tucker – six foot two, built of lithe muscle, brown hair, magnetic blue eyes, in-the-closet gay nineteen year old – who has enlisted in the Army.  He is from a small town in Texas where he never had the opportunity to meet another gay man, so he never felt the need to divulge his secret, either.  Instead, he decided he could live his lie behind “Don’t Ask, Don’t Tell.”  During basic training, though, when the very sexy, six foot four Owen Bradford is assigned as his Battle Buddy, living that lie becomes more and more difficult for Shane, or Tuck, as Owen affectionately refers to him.

Tuck and Owen’s relationship is pretty comical to watch unfold.  For all the sexiness that Owen is, he is equally as annoying to Tuck, mostly due to that sexiness!  Tuck finds his hormones going off the radar when around Owen, and has a tough time keeping that attraction internalized, especially when his body has other ideas about displaying his attraction.  Owen shows Tuck very little personal space, he is constantly ramping up Tuck’s desire, and he is the one person who gets Tuck’s goat.  Hence, Tuck refers to his time in basic as “O.B. Hell.”

After O.B. Hell, Tuck and Owen are sent their separate ways, but fate has other plans for them: after a couple of years, they find themselves back together in training for the Army Rangers.  Once again, Tuck finds himself as attracted to Owen as he was before, and with Owen’s ways, Tuck finds keeping his desire at bay more and more difficult.  Watching Tuck’s reaction to all the things that Owen does to egg him on is much fun.  And it is equally exciting to see what unfolds when that desire and passion is finally unleashed.

Not many people are gifted enough to write a novella that is as fulfilling as Battle Buddy, but Peterson does it.  She develops the characters and their relationship, she writes so awesomely hot sexy time, and she still provides the reader with a happy-for-now ending is that is most satisfying.  For me, there is nothing quite as hot as two alpha males hooking up, especially after fighting it for so long, so when Tuck and Owen do finally get together, they are explosive!  As they question and try to answer who the top Ranger is, it’s quite the draw.  As Tuck reflects, “You were one tough motherfucker if you could survive Owen Bradford fucking you.”  I so can’t wait to see where Peterson takes them next.

Great review Leigh, sounds good will have to give it a go.

Thanks for the great review! Sounds very interesting 🙂

Sounds great. Thanks for the review.

You’re welcome, everyone! I hope you enjoy it as much as I did! 🙂

thanks for the review!