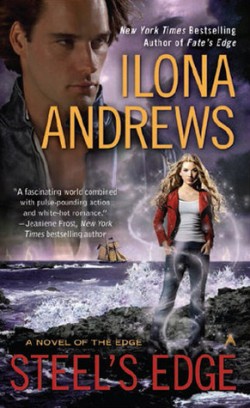 “The Andrews have once again written a winner…full of adventure, humour and romance. I couldn’t put it down” ~Under the Covers

Charlotte de Ney is not just a healer, but is The Healer and although not a blueblood from birth she has grace and poise that many envy. However, there is a dark side to being a healer, they can as easily start a plague as they can heal one, but to do so is to become an abomination. But once Charlotte tastes the darker side of being a healer, she escapes to the Edge to find peace. That is, until Richard Mar stumbles almost dead on to her doorstep with dangerous enemies in pursuit and a cause that Charlotte can’t turn her back on.

It is no big secret that I am a HUGE fan of Ilona and Gordon Andrews and Steel’s Edge is a great example of why; full of adventure, humour and romance I couldn’t put it down, my eyes became glued to the page, which let me tell you made it extremely awkward to shower, good job I demolished this book in under 24 hours!

For me this was the best in the series and I am glad it is ending on a high note (although, you will see my little rant about this series ending at the end of the review!) The fantastic world of the Edge and the Weird has been built up over the previous three books and has created a perfect setting for Charlotte and Richard to wage their war on slavery as well as develop a romance. Charlotte and Richard were great characters, Charlotte was completely different from the other heroines in this series keeping it fresh and interesting and Richard has intrigued me from when he was first introduced in Bayou Moon.

Charlotte and Richard’s journey together puts them through so many emotional highs and lows making a swashbuckling adventure story into something a little more as they try and right wrongs without losing themselves along the way. The mixture of fast paced action, humour and an intelligent storyline kept me turning the pages with relish.

But I am also an avid romance reader so seeing Richard and Charlotte come together so passionately and sweetly after being through so much was also part of the reason I read so greedily. Then there is George and Jack; from the very beginning of this series I have loved them and I am glad that once again they had a fairly big on page presence.

The Andrews have once again written a winner and I am begging them to PLEASE NOT STOP! Or at least write a book for Sophie, George and Jack, we have watched them grow from children to teenagers and I don’t think I am alone in wanting to know what they do next. Just a suggestion but I reckon George or Jack (I can never decide which one I like most!) marries a girl called Suzanne, think about it, you’ll see it makes sense……

This was a fantastic series, I enjoyed every word and I am sad to see it end so prematurely.

Thanks to Ace, we have five (5) copies of STEEL’S EDGE up for grabs.
US only.

Love the review Suz, I have this series on my TBR list can’t wait to start it.

I love this series. Actually, I love all their books. I agree with you – they need to write Sophie, George, and Jack’s stories!

Love this series. I already have an e-book copy loading to my kindle on release date but I would love to have all Ilona Andrews paper back books in my library.

This book sounds intriguing. Thanks for the great review. Can’t wait to read it.

Thanks for the great review! I’m *dying* to read this book. I didn’t enter the giveaway cuz Amazon is flinging my copy through the mail as we speak 🙂

Thanks for the review – I’m a huge fan of Ilona Andrews and like Suz I hate to see the series end so easily but I totally understand their reasons for doing so. Not entering the giveaway as I have my own copy.

I have not read this series yet, but am on my way to check it out. Thank you so much for sharing!

Thanks for the giveaway. I haven’t read the series yet its on my to be read list. Have most the books on my bookself.

I’ve had this series on my TBR for a while, but it’s SO FAR DOWN I never feel like I get any closer to it. So I’m going to have to cheat and move it up. Which is how my pile gets so out of control in the first place! LOL

Thanks for doing the giveaway!
Heather
hafowler at gmail dot com

Thank you for amping up the excitement factor. I love the Andrews’ books as well and this one is highly anticipated…I’m going through the roof!

I love Ilona Andrew’s Kate Daniels series but I haven’t had a chance to read the Edge books. Can’t wait to finally dig in! Thanks for the review and giveaway!

I LOVE Ilona Andrews…sounds like another great book and a great read!

Thank you for another wonderful giveaway!

Haven’t read this author before but the description in the review makes me want to read it. Will definitely put it on my TBR list.

I love this series – anything they do is a MUST read for me. Great post and thanks for the giveaway.

Great interview! I love Ilona’s kate daniels series and this one looks just as fantastic!
thanks for the giveaway chance!

Love the review! UTC is just AWESOME! Ilona Andrews is AMAZING! Thank you for the chance to win this book 🙂

Ilona Andrews is hands-down my favorite author – it would be such a pleasure to win a copy of their newest title 😀 My friends think it’s hilarious that I warn them to leave me completely alone on release days for anything Andrews, but they’re no longer surprised by it!

I love this series! I also love all the books Ilona & Gordon Andrews have written.

I have the first book in this series but haven’t started it yet. I’m a big fan of the Magic (Kate Daniels) series. I will be sure to start the book soon and devour the rest of the books too. I would love to win the 4th and last book!

This sounds really good, too bad I can’t enter the contest.

I love Ilona Andrews, her books are great. I can’t wait to read Steel’s Edge.

Thanks for the chance to win such an amazing book from a great author! Can’t wait to see who wins it!

I enjoyed your review and I’m sorry to see such a great series end as well.

I LOVE Illona’s books! This sounds like another great one~

Wow the book sounds great. Thanks for the review.

I enjoy this series as much as anyone who loves Ilona Andrews stuff. I agree with your review about seeing more of Jack and George.

This is an author that is an auto buy for me with each new book!

I love this series!! and you review was great!!
thanks for the great giveaway!

Love the covers, I have not read this series but am really looking forward to it. Thx for the great giveaway.

I’ve loved the series, so far, and am really looking forward to Steel’s Edge.

Great review! another series that i have missed out on!!! Thanks for the chance.

I love love love Ilona Andrews. I can’t WAIT to get my hands on this book!!!!

I agree. I love Ilona Andrews’ books! Thank you for the giveaway!

I just started reading Kate Daniels series. I am loving it so far. I would love to check out more books by Ilona Andrews.

I have the book but can’t read it yet… I can’t wait to! Love the review.

**Hangs head in shame** I have not yet had a chance to get to this author–and I have heard really, REALLY, great things. Sigh…..love your review and posting!

OMG! I wanted it before and after your review I want it even more!!!!

This sounds great. Thanks for the chance to win it!!! Love the review!

I am a total blubbering fan of Ilona and Gordon’s books. I was sad to hear that this will be the last Edge book, but I know that Ilona and Gordon will give the series a great ending…

I have the first two books in the series and am looking forward to reading the entire series. Thanks for the review and giveaway.

This is the only book in this series I haven’t read so it would be great to win it. Jack is definitely my favorite.

I love Ilona Andrews’ work – thanks so much for the review as well as the give away opportunity!