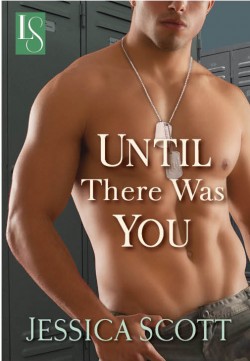 Until There Was You
by Jessica Scott

I was excited to get my hands on Jessica Scott’s Until There Was You ARC and rightly so as this author is a very good storyteller. This second installment of the Coming Home series is action packed and full of drama of a-day-in-a-life story in the military.

Evan and Claire (both Captains) had a love/hate relationship, very palpable sexual tension and very steamy love making. Though the love story was not as strong, Evan and Claire’s coming together was believable. Both leads and side characters are developed well and their story is laid out for us to see. And what I loved the most is that Ms. Scott tackles stories that are realistic such as power struggles, alcoholism, feminism and political/military concerns.

The only downfall is that it had military lingo that was too technical for someone like me and I found it a bit overwhelming. Though it was explained well, it slowed down the story for me *shrugs*. I also would’ve liked to see more of the secondary characters from the last book. I tend to get attached to them and I’m very eager to see more of their story. I do know that the next story will be about Laura and Trent titled Back To You and it’s scheduled to be released in 2013. Now, this book…I would not miss!!!

Overall, Jessica Scott delivered an intriguing, well portrayed military love story that I recommend to anyone who enjoys this genre.

This is a book I can’t wait to read!

Thanks for the review – can’t wait to read this

Thanks Maria and Timitra, you guys are the best!!!
~angela