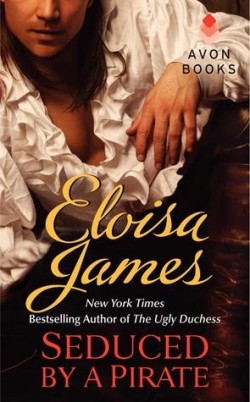 Seduced by a Pirate
by Eloisa James

Sir Griffin Barry has come home to England after over decade of being a pirate, his first though to see the wife he left on their wedding night when he was nothing but a scrawny 17 year old boy and hasn’t seen since. When he sees her, he knows he will do anything he can to win her after years of neglect.

This is a novella in Elosie James’ Fairy Tales series, and in Seduced by a Pirate it looks as though she has taken The Ugly Duckling and given it a twist! The duckling in question, Griffin, has grown from a scrawny man-boy in to a large, gorgeous and imposing pirate. I thought this was a fabulous idea; however, I did have a few problems with this novella.

The biggest issue I had with this novella was how quickly they went from having just met to Phoebe saying she wants an anullment to ohmygosh-i-love-yous, it happened far to quickly, literally in the space of hours. I understand that this is a novella so it isn’t going to have the longer drawn out love story, but for me it seemed a bit forced and out of the blue. The other point I didn’t like about this novella was that the hero was a bit of a hypocrite, and although he did own this, it still bugged me, he was angry when he thought his wife might not have been virgin, even though he left her unsatisfied) on their wedding night and gallivanted off to the sea for over ten years and was he celibate and faithful…NO! I wish she had had a love affair, I think I would have liked the heroine a lot more for it.

But despite these things, it was still a quick enjoyable read, especially if you are a fan of the series, it had some great funny moments in it, as well as a few tender ones.

New York Times bestselling author Eloisa James writes historical romances for HarperCollins Publishers. Her novels have been published to great acclaim. A reviewer from USA Today wrote of Eloisa's very first book that she "found herself devouring the book like a dieter with a Hershey bar"; later People Magazine raved that "romance writing does not get much better than this." Her novels have repeatedly received starred reviews from Publishers' Weekly and Library Journal and regularly appear on the best-seller lists. After being a finalist for a RITA—the top award in the genre of romance fiction awarded by the Romance Writers of America—over ten times, she won in 2013.