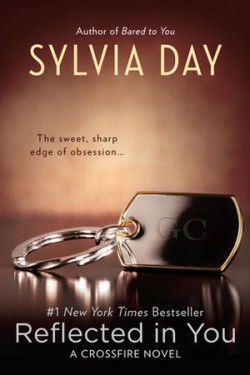 Reflected in You
by Sylvia Day

Sylvia Day has done it again.  She can seriously write a sensual and sexy story.  She can also write with a lot of emotion and show us a damaged side to her characters that you can easily connect with.

REFLECTED IN YOU picks up pretty much where BARED TO YOU left off.  Gideon and Eva are dating and have been going at it like monkeys, staying mostly at his place after the mess with Cary.This is a difficult review to write because there were many things that I liked about the book and some that I wish I would’ve liked better.

Gideon is hot and dominant and sexy as all hell.  This book will make you fall in love with him all over again, in spite the fact that sometimes I felt like clubbing him over the head.  He’s comfortable in a suit and boardroom as well as jeans and t-shirt at a concert.  He’s willing to fight for the woman he loves and to keep her by his side.  Although, I have to say that if it had been me throughout the book that he would talk to like he did…I might be in jail for assault charges.  But once things are revealed at the end, all was forgiven.

How Eva stood up for him.  My heart broke completely for Gideon when he finally opened up to Eva about his past.  And I just loved that she went on that little rampage and put everyone in their place who had ever messed with Gideon’s life.

Eva grew a pair of balls towards the end of the book, which I thought was fantastic and made me jump up and down because I was totally on her side and rooting for that to happen.  I had been complaining throughout the book that I wanted her to take more charge and see some growth, and I finally did get that.

The storyline in this book was excellent.  There were enough normal conflicts between Eva and Gideon while also having a small mystery element  after Cary gets attacked.  I actually didn’t expect that to go down like that.

I feel that a measure of healing started happening in this book for both.  And although it seems sometimes things have to get worst before they get better, I can’t wait to see where Ms. Day will take us in the last installment of this trilogy.  Anxiously awaiting.

“I found myself pinned to the hallway wall by six feet, two inches or hard, hot male.”

“It was a look that screamed SEX. Hard, deep, endless, mind-blowing sex.”

“Gimme that coffee. I want to be caffeinated when I kick your ass.”

“You know…I love you madly.”

“People get over love. They can live without it, they can move on. Love can be lost and found again. But that won’t happen for me. I won’t survive you, Eva.”

I can’t wait to read this! Thanks for the review

Just started reading this one today and I’m so excited about it!

Guest
Dalene @ A Date with a Book

I still have not read 50 Shades, but think I will read this series first. I love all the great reviews I’m seeing and enjoyed this review as well. Thanks!