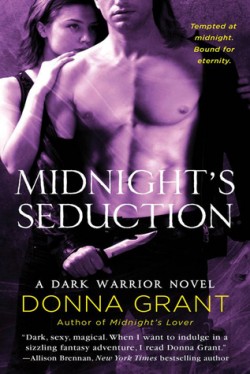 Coveted greatly because of the fact that she is a Seer – a true rarity in the Druid world, many would do anything in order to have Saffron Fletcher in their possession. However, Camdyn MacKenna has had his nights on Saffron for some time now. His desire for her is barely leashed…

Saffron has recently got her life back. Three years ago, she suffered from a tragedy where true evil blinded her. Living life without sight became a setback for Saffron, yet she still remained strong and independent. Now, with the power of magic, the veil has been lifted from Saffron and she has gained her sight back. However, the world around her doesn’t look the way it did before. As she acclimates to these sudden changes, she notices that there is one Warrior that captures her eye.

Camdyn and Saffron are a great match for each other. Though I thought that the romance was slow to begin with, so much other stuff occurs that you hardly notice it. This is understandable because Camdyn isn’t a forceful suitor. He’s much more laid back, however, this desire for Saffron grows by the minute as he sees how much more beautiful and strong she is in times of dire need. As Saffron deals with her personal problems with her mother, Camdyn slowly gains her trust in a way that bloom wonderfully.

I have to say that Saffron has become one of my favorite heroines in this series. Danielle and Ian are my favorite couple, but Saffron and Camdyn are in second place. I just adore it when authors have a character, whether the hero or heroine, come back from a particular setback bigger and better than before. And Saffron’s transformation in this book is an amazing one. She really became the best thing about this book, and the fact that Camdyn is her support makes this book turn from good to great! As I said earlier, Grant makes some major leaps and bounds in MIDNIGHT’S SEDUCTION. This is definitely not a book to be missed. Everything that readers have been waiting for comes down to this one moment where the Warriors can truly prevail over Declan and Deirdre. However, will their plan backfire before it even begins?

MIDNIGHT’S SEDUCTION is another fantastic addition to the Dark Warrior series that melds sexy paranormal with a touch of historical making it a darkly magical tale to remember.