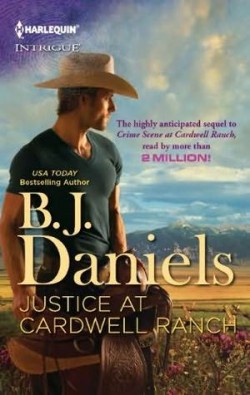 Years after leaving Cardwell Ranch on poor terms with his family, a very different Jordan Cardwell returns to Big Sky, Montana. Not necessarily to make nice with his sister, Dana, who has run the ranch since their mother’s death, but to investigate the apparent suicide of his best high school friend twenty years ago after receiving an urgent phone call from another former high school friend, relating that the suicide was not all that it was deemed. Upon his arrival, another murder takes place, making Jordan a suspect, spurning his interest and that of the Deputy Marshal to investigate many of their former high school mates.

Deputy Marshal, Liza Turner is heading up the investigation, while her boss, Hud Savage, looks after his very pregnant wife, Dana,Cardwell Savage. Liza also remembers the old Jordan and is quite surprised with the apparent changes in the man. Trying to be very wary of Jordan, Liza is attracted to the brooding male at the same time. Both Liza and Jordan attempt to unravel the mysterious web of deceit and jealousy that goes all the way back to high school to solve the suicide/murders that are at the forefront in Big Sky’s history. Not only the intrigue of crimes committed feed Jordan’s need to find out all that happened, but his attempt to come to terms with his own past make Justice At Cardwell Ranch by B.J. Daniels, a must read.

I loved this book. B.J. Daniels’ awesome sense of storytelling made me continually turn each page until the final one was read. I literally could not put it down. Her strong and interesting cast of characters make you want to be a part of the story. When you think you have the mysteries solved, the evidence takes you on a roller coaster ride you can’t stop. Sharing the Cardwell families highs and lows is a pleasure I hope B.J. continues. I highly recommend this book.

I can’t wait to read this – just got it myself:)

Review: Justice at Cardwell Ranch by B.J. Daniels | Gone with the Words

[…] Kimberly @ Under the Covers Book Blog – “I loved this book. B.J. Daniels’ awesome sense of storytelling made me continually turn each page until the final one was read. I literally could not put it down.“ […]

Review: Justice at Cardwell Ranch by B.J. Daniels | Gone with the Words

[…] Kimberly @ Under the Covers Book Blog – “I loved this book. B.J. Daniels’ awesome sense of storytelling made me continually turn each page until the final one was read. I literally could not put it down.” […]