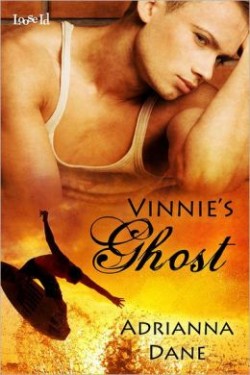 Vinnie’s Ghost is a good and engaging novella.  It is one of those stories that is tough to decide on a rating, however.  There were some parts that I just loved, and there were some parts that were just okay, but for the most part, I liked and enjoyed the story as a whole.While this story involves a monogamous relationship, there really are three main characters at play here: Stroker, a surfer and surf board creator in Pleasure Point, California; Lee, a roaming ex-Army vet; and Vinnie, Stroker’s boyfriend and Lee’s comrade in the Army, who died overseas while serving his country.  Vinnie’s Ghost begins roughly two years after Vinnie’s death.  In the event of his death, Vinnie asked his close friend, Lee, to deliver a letter to his boyfriend, Stroker.  After leaving the service, Lee suffers from PTSD and roams, but finally finds his way to Stroker in Pleasure Point, intent to do the one thing that his best friend requested of him.  It doesn’t take long for Stroker and Lee to form both a friendship and quickly thereafter, a sexual relationship.  Lee, however, has yet to give Vinnie’s letter to Stroker.  Why?  We eventually are provided with a reasoning of Lee’s withholding, but that is one of the things that was aggravating while reading it.  I kept saying, “Please, just please give him the letter already!”  Well, as expected, when he finally does, things go in the expected direction – south.  I don’t want to give too much away, but was it frustrating?  You betcha!  Does Dane remedy the situation, though?  She does.  She provides insight from both Vinnie and Lee’s points of view, and all of the emotions involved make sense once revealed to the reader.

Of course there needs to be some sort of conflict between these two men to help them find their HEA, but as I said before, there is another character also at play here – Vinnie.  Vinnie speaks to Lee in his head.  At first you don’t know if Lee is just suffering from more than just PTSD or if Vinnie is actually doing the speaking, and this is a rather odd part of the book.  Ghosts fit in well with the paranormal and urban fantasy genre, but not the contemporary.  It’s a bit of a stretch.  That said, though, at one point when I was so frustrated with Lee, I found that I was thinking to myself, “Wow – I really wish Vinnie was alive…I think he’s my favorite character!”  Vinnie’s voice gave the reader insight as to the man that he was, and why both Stroker and Lee loved and cared for him as much as they did.  And I’ll just give a small warning, make sure to have the tissues ready when the letter is finally revealed.

Due to the reluctance to give Vinnie’s letter over to Stroker, Lee’s character is often quite melancholy, and I found myself wishing for at least a joke or witty conversation to make me laugh.  It didn’t happen however, but it does make sense: Lee suffers from PTSD and is also trying to figure out who he is, who he loves, and just what living is all about.  Thankfully, Stroker is a patient guy, and he can see the good man that Lee is.  And fortunately, the heat in the bedroom (or ocean, beach or workshop, as the case might be) is not lacking or influenced by that melancholy.  These men are sizzling and just beautiful together.  Both of them just need time to find each other and to move into a relationship where there is nothing (and no ghost) between them.

So while there were frustrating parts in Vinnie’s Ghost, there were also some great ones, and overall, I did enjoy reading it.  Beyond the story itself, Dane provides beautiful descriptions and details in her prose, and it is a breath of fresh air for how poetic her writing could be.  I look forward to reading more from her.

Purchase Links: Did you like this review? If so, please tell us your thoughts in the comments below! 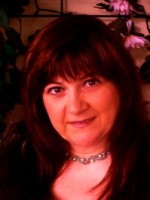 Adrianna Dane (who also writes as Tess Maynard) has been putting pen to paper since the age of ten. She currently resides in the state of Washington and is a member of Romance Writers of America, EPIC. and Broaduniverse.

The first defining love story Adrianna read back in junior high school was "Wuthering Heights" by Emily Bronte, and that set her on the road to her long standing love affair with the romance genre. Her inspiration in writing often can be found by listening to song lyrics and reading poetry by such poets as Elizabeth Barrett Browning, Edgar Allen Poe, and Ranier Maria Rilke. But finding inspiration for her stories truly has no boundaries for Adrianna.

She freely admits she is a romantic by nature and adding sensual heat to romance with a dusting of suspense is her motto. "Esmerelda's Secret" released by Amber Quill Press in June of 2004 was Adrianna's first book, and with that story and her subsequent books has firmly established herself as a voice within the sensual/erotic romance genre.

I have lately started appreciating stories with a military or post-military theme to them. I hadn’t heard of this one and it sounds decent.