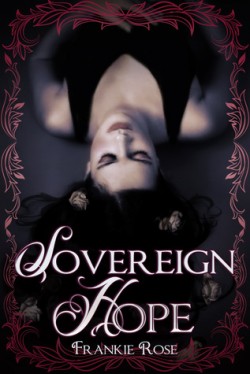 Farley Hope has been trying to get by with her life since her Mother turned up missing six months ago. But things are seeming hopeless especially with her hallucinations getting worse and now people are following her. When a stranger helps her, he turns her whole world upside down.This is an interesting spin on immortals and a prophecy. You quickly find out that there is a prophecy regarding Farley but you never really know what else is going on. As frustrating as it was, it’s also what kept me interested.

Farley just wants a normal life but unfortunately that is not what she is getting. She also wants to find out where her Mom is and what happened…that is her main driving force. It was hard watching her whole life get turned upside down. And then having to deal with Daniel on top of it.

Daniel…he is definitely interesting but he is so mean to Farley. As things progress, you get a sense of why he does what he does. But the problem is that Daniel isn’t totally human either and it takes awhile to find out what he is.

There is a whole community that lives below ground in what’s called the Four Quarters. Many of them are against The Reavers, who are the immortals and the ones that Farley is prophesied to kill. You get to meet a few of the them and they are some great characters.

The story really reminded me of The Mortal Instruments. Daniel is a great Jace and there are many similarities between Clary and Farley. Even their “romance” is strikingly similar and definitely YA.

I really enjoyed the ending and while the main problem is somewhat resolved, it does leave some things open for the next book in the series, Eternal Hope, which is suppose to come out September 2012.

♥ “It’s a beautiful dream, love. But some dreams just cost too much.”

Frankie Rose was born in the United Kingdom, but now lives with her husband in sunny Australia.

She officially makes things up for a living, and when she's not doing that, she is generally making paper birds out of receipts and old lists or taking photographs that make her smile.