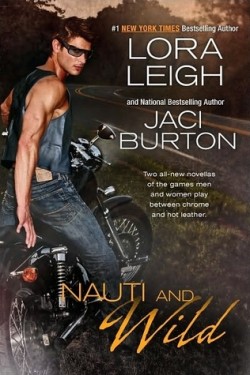 First things first… Look at that shiny new cover this book got when it was re-released this month!  *drools*  Although I already have the print with the old one, I maaaaaaay be tempted to buy this one as well.  In case you haven’t seen the old cover, here it is.

But enough of that.  This book is special to me because this was my very first read by Jaci Burton.  Yep.  I discovered her when this book came out because I was anxiously awaiting the last Nauti story by Lora Leigh.  See why anthologies are so important?  After reading this, I went back and pretty much have gone through I would say 85-90% of Jaci’s backlist and she is now an auto buy for me.

This is the last chapter in the Nauti series.  For an ending it was ok but it didn’t blow me away and I think part of that was the fact that I really had no vested interested in the couple featured.  John is Rogue’s brother.  We met him during her book and although I really liked her, I could take or leave her brother.  He’s big money, society and a hot shot lawyer.  Which is a lot of what Rogue was trying to get away from.  In his story we meet a woman that has been in love with John but he’s always seen her as the innocent he didn’t want to ruin.  Except he ruins her and then can’t remember it because he was so drunk!  OK maybe that pissed me off a bit.  When he leaves town, Sierra is attacked and nearly raped and John comes back to protect her.  Much in the same way as the first Nauti book storyline goes.  NAUTI KISSES worked well as a short story without leaving out any important details of their relationship.  Of course it helped that the love and crush had been developing for years for my mind to come to terms with that.  However, I thought a little more originality could’ve been put into this story being that it would end the series and maybe the couple choice should’ve been better or at the very least, the characters been more present in the previous book.  But overall it was a good story and not a bad intro to Lora Leigh or the Nauti series if you haven’t read either.

Like I said before…new author for me when I read this and it blew me away.  I mean, I can’t resist a hot biker who is also some kind of special military type agent and riding with a bike gang.  So basically Rick is assigned to protect a senator’s daughter who is riding with the Hellraisers bike gang.  Ava had decided to ride with the gang in order to try and see what was going on with her childhood friend Lacey, who had become involved with one of the leaders.  Rick has to infiltrate the gang so that he can protect Ava but to make matters more interesting, this is the same gang that Rick used to hang with ten years ago when he was nothing but trouble and before the Wild Riders, and his cousin Bo is now the leader.  Gives him an in but also puts a lot of doubt on everyone’s minds as to his real reason for being there.  Rick is just to die for!  Take me on a ride on the back of that bike and runaway.  HOT HOT HOT!  Ava was young but not so stupid, loyal to her friends, smart about her choices and one all around lucky gal if you ask me.  Rick is controlled and you would think intense and tough but he’s got such a soft side when it comes to Ava.  He truly makes her feel beautiful and cared for.  And all this with just the right amount of danger while riding along all those hot rods. 😉

Oh I love Jaci Burton’s book, now I must say that Lora Leigh;s book is good too. But I have not read any of her books.. So this one is going on the TBR list.

My fav cover is the new one! I agree with you Francesca this one didn’t blow me away either…my favs of this series are Nauti Nights and Nauti Deceptions! I haven’t read Jaci’s story as yet but I will.

Timitra, I think I like Nauti Deceptions best. Hope you start Jaci’s series soon. And yes, I might just have to cave and get the new cover.

Kathleen, both are great authors and great series.