Join our newsletter to be the first to hear our latest news! Learn More
Home / Reviews / Review: Dead Witch Walking by Kim Harrison 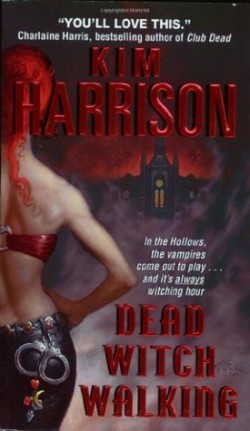 It’s about freaking time I read this book! I’ve had this book on my TBR shelf for so long and upon starting this book, I realized that I made a huge mistake of waiting this long! Rachel Morgan is kickass, fun, feisty and a thrill to read!

Rachel is at a turning point in her life. She has made the major decision to leave her job with the IS, taking with her one of the best runners, a vampire named Ivy. Now, the IS doesn’t do well with people who decide to just get up and leave so immediately, Rachel has a new enemy on her hands as an assassination order is put on her. She gets kicked out of her apartment and is forced to live in a church with Ivy. At this point, things really start to go downhill when Rachel gets caught up with the likes of Trent, a sexy and powerful councilman who has his fingers in a lot of dangerous pots. Harrison turns the dial up on the action and the plot twists until your mind is spinning from it all.

Many readers have said that this book suffers from “first book of the series” syndrome. Yes, I think I would agree with that. However, I definitely don’t think it’s a reason not to give this series a shot. DEAD WITCH WALKING hooked with me with the first chapter and then kind of lost its way a little bit in the beginning. Harrison hits you with a lot at once so getting a feel of being in Rachel’s mind while feeling out the world at the same time was a little hard. Some scenes aren’t as clear as they could be and I don’t always agree with what happens in the book, but I still found the book moving at a good pace. By the middle I was hooked and I finished it quite quickly after that.

Despite the minor areas that kind of blur together, Harrison seems to have a clear image of The Hollows in her mind. I like that she is willing to pull out anything to make her books interesting. I mean, really a witch who turns into a minx? I never thought something like that would be entertaining.

If you’re looking to try this series out, then I say go for it! Don’t let the slow scenes get you down. After you get through them, this book really is a breeze to read and from what I’ve heard, the series only gets better from here!

Kim Harrison is on of my all time fav’s and boot to the head for waiting this long LOL!

This is one of my favorite series. Hope you enjoy the rest of the books.

I love this series! When I read the first book, I didn’t really get into the book until the halfway point. After that, I was hooked for life!

FINALLY!!! *sighs* I <3 The Hollows & I love Rachel Morgan! She's def kick ass! She's funny too.. TELL ME YOU LOVE JENKS!! Who doesn't!! Oh to just jump his bones, if it weren't for his wifey and so many kids xD The series definitely gets better. I hope you get a chance to read them all soon! ^_^ Great review, Ann! You got it all in a nutshell :)

Adding to my wishlist-thanks Ann!

Hey Krista! I know what you mean. But I actually enjoyed the entire book. It was a good one

Heeeey Ana! Thanks, I’m looking forward to reading them all. I’ll keep you updated 😛

Interview and Giveaway with Kim Harrison | Under the Covers Book Blog

ARC Review: The Witch With No Name by Kim Harrison | Under the Covers Book Blog