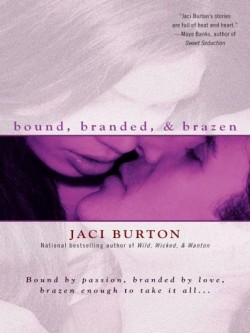 Three weddings and a funeral.  But actually the other way around.  The death of their uncle has brought Valerie and Brea home in Oklahoma to help their sister Jolene run the ranch.  Who would’ve thought such a sad event would’ve brought love into their lives?

Valerie, the older sister, thought she wasn’t cut out for the ranch lifestyle and left the ranch and her ex-husband behind and moved to the city to become a “real” doctor.  But now that she’s back, feelings and sparks rekindle between her and Mason.  I love second chance stories and theirs was sweet because they are able to work through the issues they couldn’t when they were young and in love.  Sometimes at that time it seemed all they had was great sex, and now they still have that but more.

“Hey, I didn’t know a striptease went with the stitching.”

Brea, the middle sister, is the shy one of the bunch.  She’s never been too much into dressing up and taking care of her appearance and doesn’t have the best self esteem.  When she gets back she’s captivated by one hot horse trainer.  Washboard abs, tanned skin, skills to tame even the wildest animal, control…and on top of all that sexiness, he’s a reader!  =)  He’s up front with Brea about him not being boyfriend material but Brea gets past his defenses and has him wanting more.

“Well, yee haw, honey,” Jolene said with a wide grin on her face.  “There’s nothing better than being with a man who knows what to do with his dick.  Congratulations.  So what the hell are you doing with us?  Go ride that bad boy until you wear him out.”

Jolene, the youngest sister, has the hots for her foreman’s right hand man, Walker Morgan.  Jolene is not a girly girl, she’s been working her ranch her whole life.  She enjoys it.  She’s also very confident and determined to get what she wants.  And it’s time for Walker to realize she wants him.  Walker was hot with just the right amount of fight in him about getting together because she’s the boss and he’s the ranch hand. They were great together!

I loved the dynamics between the sisters in this story as well.  They are funny and give each other hell all the time but they’re also there for each other now more than they’ve ever been.  Again, if I had to pick a favorite couple in this story I’d have to go with Gage and Brea.  They were both the most changed by the end of their story.  Him being a drifter and now wanting to stay somewhere and call it home with the woman he loves.  Her being completely confident and having come out of her shell.  And hot, yeah, scorching hot!  Gage is just too hot to handle.

Jaci Burton is a New York Times and USA Today bestselling, award-winning author of over 50 books. She lives in Oklahoma and when she isn’t on deadline (which is often), she can usually be found wrestling with her uncooperative garden, wrangling her dogs, watching an unhealthy amount of television, or completely losing track of time reading a great book. She’s a total romantic and longs for the happily ever after in every story, which you’ll find in all her books.