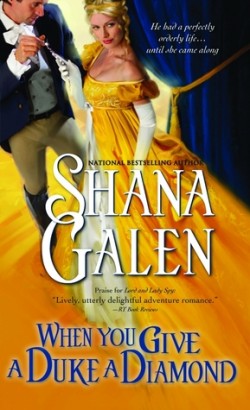 When You Give A Duke A Diamond
by Shana Galen

In a fresh new beginning to a series, Shana Galen brings forth scandal, mystery and the perfect balance of class and seduction.

Juliette is just one of the celebrated courtesans called Three Diamonds. Dubbed as the Duchess of Dalliance, she is in the constant eye of society where her actions and her non-actions are heavily noted. This time, rumors are spreading of her affair with the Duke of Pelham. This supposed intensely passionate affair is the talk of the town since Pelham has his own fiancée already. It’s really too bad that Pelham and Juliette haven’t actually met until one horrid act beings them together.

After a particularly rude first interaction, Juliette and Pelham go their separate ways, effectively putting the rumor to rest. However, when Pelham’s fiancée is murdered and Juliette is the sole witness, she and Pelham are thrust into a world of deception and mystery.

This was my first read by Shana Galen and it most certainly will not be the last. I absolutely devoured this book. Galen weaves an intricate and interesting plot where a case of stolen diamonds are the single most important thing everyone needs.

I was impressed by Galen’s ability to set up the series well. Within the first few chapters, I already wanted to know more about Lily and Falon, the other two Diamonds. Moreover, Galen addresses the issue of a lady of ill-repute with a man as titled as Will, the Duke of Pelham. I loved that Will was somewhat tortured by his past and I absolutely loved the fact that Juliette was willing to help him get over that.

While I thought that sometimes the same issues kept arising within the relationship, it was still nice to see two characters make a real effort to be with each other. Neither one of them gave up when things became difficult. And that to me is a true testament to Galen’s writing. I cannot wait for the next book!

This book is already on my tbr list.. good review..

I just got this book over the weekend and can’t wait to read it. Thanks for the review

Thanks ladies! I enjoyed this one a lot!