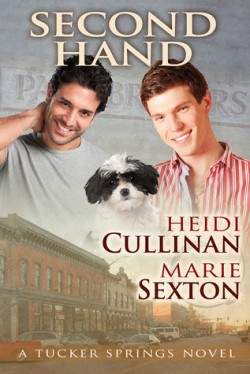 SECOND HAND had me going through ups and downs.  Starts out a bit strange for me, with Paul’s girlfriend breaking up with him for another guy.  Stacey was living with Paul and they were pretty serious (at least Paul thought so, since he was thinking of proposing and even had a ring picked out).  But their relationship seemed to be odd to say the least.  Paul is an odd guy.

He meets El at Tucker Pawn (El’s business) while he’s on a sad trip to buy his ex-girlfriend Stacey a birthday present.  Jewelry should definitely get him the girl back, right?  El thinks Paul is cute from the very first time.  They slowly develop a friendship, awkward at best, while Paul is still having his own pity party because of his failed relationship with Stacey.

Now here’s the thing…Paul has never really considered that he is gay.  Of course that one time that his friend and neighbor was playing with him apparently didn’t clue him in to his own tendencies.  But here’s my issue, which was a down for the story.  I felt that Paul “used” El for quite the majority of the story.  El was there for him, and to pick up the pieces of Paul’s sorry self, whenever Paul needed him to be.

That being said though, when Paul and El are together, whether it’s as friends or lovers, they are the cutest and hottest.  Cute coming from Paul because he’s a bit awkward and innocent.  Hot because El is just HOT.  When El actually tells him everything he wants to do to him… *THUD* yeah that was me falling off my chair.

I really think that Stacey should’ve gotten more of a bad deal because she was a total bitch but at least it makes me happy to see that Paul is now with someone that cares about him, respects him and would do anything for him.  And you could feel all that through just a short story and the short period of time that they knew each other.

It’s amazing what you’ll find at a second hand store- apparently love. I liked the other book I read by Marie Sexton so I’ll have to give this one a try.

I will right away snatch your rss as I can not to find your e-mail subscription hyperlink or newsletter service. Do you’ve any? Please let me know so that I could subscribe. Thanks.|