Join our newsletter to be the first to hear our latest news! Learn More
Home / Reviews / ARC Review: His Very Own Girl by Carrie Lofty 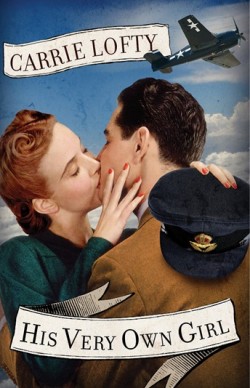 His Very Own Girl
by Carrie Lofty

When I first saw this book I thought “Wow I don’t think I’ve read anything in fiction centered around this era”.  This might just be because of the lack of romance novels that want to tackle such a sad time but I’ve watched more than my share of movies. They are always the hardest stories to read/watch and they especially tug at the strings of my heart.  That being said, Ms. Lofty captured the time with precision and emotion.

Reading HIS VERY OWN GIRL was almost like watching a movie and the story had me so involved I couldn’t put it down.  It’s a story of love in trying times, of the strength of two people to do what was right for their lives, for their countries, for so many other people and to find their way back to each other.

Lulu Davies is a British pilot who has already experienced a big loss in her life.  Her fiance killed himself after coming back home from the war with PTSD.  She’s been alone for a while and swore she would never give her heart to anyone else again.  Only one night dates for her from now on.

But then came Joe Weber, an American paratrooper who had been tapped to be a medic.  They first meet when he drags her out of her own plane after she had to do a rough landing.  From there, they see each other a few times, and always Lulu intended it to be the last.  But Joe is persistent and he keeps going after her until her resolve starts to break down.

While they flirt and date and fall in love, war is going on around them.  At times I felt that I could’ve done with less of the war times descriptions because it just always seemed so real that it made me sad.  And speaking of sad, this book is such a tear jerker.  I’m even crying writing this review, already had to take two breaks and then I come back to write it and as I think about it I get teary eyed again.

A hero that is just that, a true hero, even though at times his macho attitude and way of thinking had me wanting to slap him silly.  But it was different times and that’s the way the majority of men thought.  Joe also fits the tortured hero mold.  I won’t tell you what’s in his past so I don’t ruin the story as it unfolds but lets just say he tried to do the right thing and only got screwed for it.

And then there’s Lulu.  You have to love and hate Lulu.  Love that she is strong when women were only looking for a man to lean on and take care of their problems.  Love her for wanting to be there for her fiance when he was struggling with PTSD when even he had given up on himself.  Love her for opening up her heart again, because once she does she loves truly and unconditionally.  But also hate her for being stubborn, because she didn’t make things easy, because she still had things her way.

I recommend that you read this beautiful love story, but make sure you have a box of Kleenex handy.
*ARC provided by author
Did you like this review? If so, please tell us your thoughts in the comments below!

I got to read this story too and I loved it. It is so authentic to the times. Lulu frustrated me too, but its a good story.

Glad you got a chance to read it as well and that you loved it. I hope more people read it because it was a great story.

What a sweet review. Sometimes I love to read a tear jerker just to get the tears really flowing!
catherinelee100 at gmail dot com

These seems to be a book that I would thoroughly enjoy reading. Thank you for bringing to my attention. I appreciate it!

These seems to be a book that I would thoroughly enjoy reading. Thank you for bringing to my attention. I appreciate it!