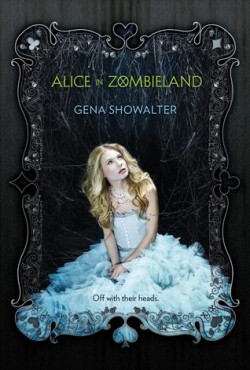 Alice in Zombieland
by Gena Showalter

“Congrats to Gena Showalter on another story very well written, totally captivating and originally HERS.”
~Under the Covers

You have no idea how happy I am that I don’t have to start this review saying “I AM IN LOVE WITH A ZOMBIE” because if there’s an author out there that can make me say that, that would be Gena Showalter. I have read most of her adult books, but this is my first YA book by her that I’ve read and I can just say one thing about that…I love how much of her fun personality come through in this book.This was such a fun and original read because her zombies are not just regular zombies…And, oh yeah: “I AM IN LOVE WITH A ZOMBIE KILLER”. I might feel like a bit of a cougar right now because I have the hots for Cole.I was captivated and enthralled from the first line:“Had anyone told me that my entire life would change course between one heartbeat and the next, I would have laughed.”Alice Bell has grown up thinking her dad was crazy and that all she wanted was a normal life. She always talked about the monsters in the night and they all had to stay in at night and learn self-defense. She resented that until the night both her parents and her little sister died…because they’ve gone out at night on her request.

She realized then the monsters were real and she didn’t understand any of it until she found a group of kids at her new school that were already fighting them. Fighting helped her cope with her loss.

No sweet sixteen for Ali. Except some good came from all that. She met good friends, true friends. Kat is one in particular I want to fold in my pocket and carry around with me to take her out when I need a pick me up. She is so funny, so supportive and such a loyal friend.

Then there’s Cole and the rest of his group of zombie killers. Cole and Ali share a special and unique connection, they are literally drawn to each other like moths and I was drawn right along with them.

Ali is strong and kick ass and everything I want a sixteen year old heroine to be. But she is still a normal teenager, wanting to have friends and be normal and crushing on a hot guy. She’s got balls to confront people threatening her and not to be scared of her bad boy crush but embrace him and fight right along side him.

The story was great with a bit of a twist and a sad at the end. I absolutely cannot wait for the next book in this series. Congrats to Gena Showalter on another story very well written, totally captivating and originally HERS.

No way did I want to be known as Pinot Grigio. (That’s what my my parents had called me anytime I’d gotten my whine on. They’d called Em Pinot Noir.)

Thanks for the review – I haven’t read this yet – couldn’t decide if I wanted to or not because it’s YA:)

Sounds interesting. I don’t normally read YA, but I do so love Gena Showalter.

Wow this sounds really good. I had no idea she was coming out with this one.

I can not wait to read this book! I have been stalking Gena’s website on this fascinating story and have entered every chance I get to win this book! Thanks for the giveaway! Great review!

Great book! Glad you enjoyed it 🙂

Looking forward to trying one of her YA novels. This Alice sounds too tempting to pass up!

I am so excited to read this!