Join our newsletter to be the first to hear our latest news! Learn More
Home / Reviews / Review: Starlight by Carrie Lofty 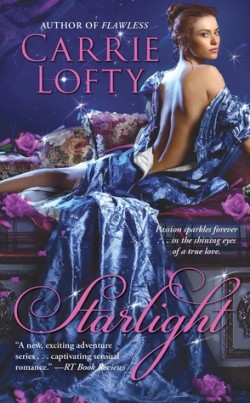 Historical romance does not get much better than this!  STARLIGHT was beautiful from beginning to end.  With a hero you just can’t help but falling in love with, a feisty heroine full of passion and courage and a story of two opposites that perfectly compliment each other.  This book had it all.
Alex Christie, the eldest of the siblings, thought he wouldn’t have to get involved in the scheme his late father had created to have each kid take over a struggling business.  But he is forced by his father in law to do in order to keep his son with him.  His son is the only thing he has left after his wife died and he will do anything to protect him.  Even going to Scotland and taking over the textile business his late father owned there and making it profitable again so he can collect on his inheritance.
Not very business savvy and in need of some guidance, who better than the union’s spokeswoman, Polly Gowman.  She’s smart, outspoken, sassy, daring and a lot of fun.  She is also loyal to her people and their interests and will protect them with everything she’s got.
Alex is definitely my type of hero.  He’s hard, rough and even brooding but he allows those walls to come down and is playful with Polly.  He’s intense and had me tingling on more than one occasion.  Polly on the other hand is no wilting flower and can stand up to him as well as match him in his desires.  Whether that’s in the bedroom or in an alley while they’re running away from the bad guys.
The element of mystery in this book was also perfectly woven in with the romance.  It does not take away from them as a couple but it adds another dimension to what they’re going through.  And if I have to be honest I did not expect the ending and resolution to turn out the way it did, even though maybe I should’ve.
Job very well done Ms. Lofty.  I cannot wait to read more about the Christies and what adventures await next, but Polly and Alex will be a pretty hard to beat couple in my heart.

I haven’t read a historical romance in awhile-thanks for the great recommendation Francesca!

This might be just what you need then. Even though it’s book 2, it can be read as a standalone.

Thanks for the great review! I have the first book in this series and need to get this book so I can read them back to back.

This looks terrific. I do love a great historical romance!! Appreciate the review!

Hope you enjoy as well!
Francesca