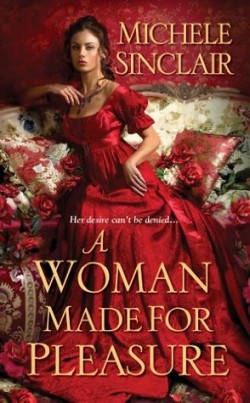 A Woman Made for Pleasure
by Michele Sinclair

At the innocent age of twelve, Mildred Aldon and her childhood playmates Aimee and Jennelle, together called the Daring Three, make a pact to not marry and fill their lives with adventure instead. Their pact however comes with several contingencies that if they find the man who fits all of their requirements, they may in fact marry. Millie’s almost impossible exceptions are, that she would only wed if she found a man who would allow her to hunt, ride astride, climb trees and explore caves. How funny it would be if the one to create this pact was the first one to fall?

Chase Wentworth, the Marquess of Chaselton has been friends of sorts with Mildred since childhood. Chase, brother to Aimee, has always considered his sister’s friend a bit of a nuisance even is she aslways fascinated him with her daring sense of misguided adventure. Always getting into trouble that Chase often got her out of, Mildred was obstinate and reckless. Chase eventually leaves home to embark on a mysterious journey of international intrigue, leaving the Daring Three to their perils.

Eight years later, Chase returns home, mostly on a mission to reveal a traitor in the midst, but when he sees Mildred all grown up, he is more than distracted by her. She is still that reckless and obstinate girl, but she is also an attractive distraction. Much to her girlfriends’ dismay, Millie’s fall is inevitable once Chase returns to the fold, not only is she immediately drawn to him, but she knows he has an ulterior motive for returning to his home.

A Woman Made For Pleasure is Michele Sinclair’s first book in her Promises trilogy and I will definitely read the next in the series. Millie in the beginning is a tad annoying. She’s the one that comes up with this pact, hims and haws about the Daring Three having to forgo any possible romance. Even when she re-connects with Chase she is in denial of what they have or could have if she only loses her inability to bend. I thoroughly enjoyed when she becomes the “hypocrite”, leaving her friends to their own devices. Chase’s character is quite an great one. I really enjoyed his maturity and understanding, his strength and his wile. The exciting side story with Chase’s hunt for the traitor only adds to the budding relationship that he has with Millie. I really enjoyed this book. I am a longtime fan of Michele Sinclair and will continue to be so. I highly recommend A Woman Made For Pleasure.

This historical sounds sweet! A debut I have not heard of yet, nice review on it!

Thanks for the author/series recommendation Kimberley!