Maidens…. Shiloh Walker is back with a different name and a brand new attitude.   Her brand new series KIT COLBANA is kicking off with the hot off the press BLADE SONG, which released just a few days ago, and this is a must read book!  We had the chance to ask J.C. Daniels some questions, here’s what she had to say. 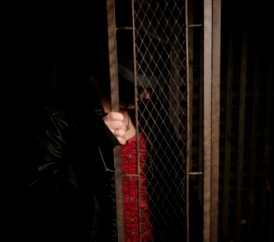 I loved Blade Song please tell me you are making this in to series, and if so do you have a number of books in mind (fingers crossed for yes!)?

I don’t plan like that…I lack the organizational gene. 😉 I would like to make it into a series. Self-publishing, though, is a lot of work, so I need to see how BLADE SONG goes first. If things go well, yes…I do have a second book, and a third that I’m working on. After that? Who knows. But it all depends on how BLADE SONG does really.

What gave you the idea for Blade Song? Is everything planned out or do you plan as you go?

I don’t generally plan out. The first few pages of this sat untouched on my laptop for a long time. I’d written a short story that is available for free on TOR.COM (A STROKE OF DUMB LUCK) that was about Kit and I’d wanted to write more about her and I even knew vaguely how the story should go, but the problem was Damon. He wasn’t coming together in my head. And then at the beginning of the year, he was just suddenly… there. The story exploded in my head and I couldn’t get it down out onto my computer fast enough.

Kit and Damon got quite… close in Blade Song and I loved watching the tough girl foreplay (stabbing, hitting, name calling, death threats etc) in the next book will their relationship be something you focus on?
Ah…I can’t answer that.
Blade Song has the feeling of the Kate Daniels series, if Kate and Kit ever got together, do you think they would be BFFs or would they have a badass girly show down (if they did, who do you think would win?!)?

I don’t know if they’d get along… LOL. And I suspect Kate would take Kit down. But Kit would go down fighting. And I don’t think it would be very girly…on either side. *G*
You are writing a different genre now. What are the challenges you encountered with BLADE SONG and urban fantasy that you haven’t dealt with before in your writing?

Well, I’ve always written all over the romance map, so I’m used to trying different stuff. The main thing with BLADE SONG was just there wasn’t going to be a nice, neat little bow at the end, but that wasn’t the way the story wanted to go, anyway.

Tell us an author crush of yours that you’d go (or have gone) fangirl over.

I totally fan-girled over Susan Elizabeth Phillips and Nora Roberts. I think Nora thinks I’m a total freak at this point, because I honestly said, “Um, can I just stand here and stare at you for a minute?” But she was unbelievably gracious about it.

And then… I accosted Susan Elizabeth Phillips… I’m actually just going to paste the story from my blog, because it’s been a few years but…well. It was kinda funny. This was from RWA when it was in Washington DC

One of the authors I got to meet was Jayne Ann Krentz-love her books. She was one of the authors I discovered right after I found Nora Roberts. I introduced myself to JAK and she tells me she enjoys my books. At this point, I’m somewhere in the vicinity of the clouds-the cirrus ones…you know, those really wispy ones that are like almost in the stratosphere? That’s where I was.

When I get back to my room, I tell my mom. One of my fave authors has read my books. o_O Can we say ‘googly-eyed?’ I’m talking a mile a minute while I grab my stuff for the parties. A few minutes later, we hit the door and head down the hall. At the same time, one of my neighbors also heads out. My friend is talking to the lady…she looks very familiar, I can’t figure out why, and naturally my friend isn’t exactly catching my ‘subtle’ signals. So finally, I ask outloud… “Who is this?” while I’m rudely pointing at the lady.

The lady smiles, as friendly as can be, and says…. “Oh, I’m Jayne Ann Krentz.”

I blink, and then say… “No, I just met her.”
And my friend is rolling her eyes, looking at me and going, “You are such a dork. This is Susan Elizabeth Phillips.”

I die. Then I accost Susan Elizabeth Phillips. In the hallway. I grab her and hug her and squeal, “Oh, I love your books!” (I’m not a hugger…I am not normally a squealer, either)
Turns out that SEP heard me telling my mom about me meeting Jayne Ann Krentz. My friend thinks I’m strange and weird and rude, but apparently SEP thought it was funny. Made her laugh… that’s not a bad thing, right?

If you could meet one author you’ve never met, who would it be?

What book do you wish you had written?

Eh, just the ones I write. I’m happy with those. I couldn’t tell the story somebody else writes and it have the same effect, so why try?

Who is your favorite UF heroine?

Kit Colbana—half breed, assassin, thief, jack of all trades—has a new job: track down the missing ward of one of the local alpha shapeshifters. It should be a piece of cake.

So why is she so nervous? It probably has something to do with the insanity that happens when you deal with shifters—especially sexy ones who come bearing promises of easy jobs and easier money.

Or maybe it’s all the other missing kids that Kit discovers while working the case, or the way her gut keeps screaming she’s gotten in over her head. Or maybe it’s because if she fails—she’s dead.

If she can stay just one step ahead, she should be okay. Maybe she’ll even live long to collect her fee…

READ OUR REVIEW
Find out more about J.C. Daniels and Blade Song by visiting
http://jcdanielsblog.wordpress.com/

About the Author:
J.C. Daniels exploded in being in May of 2012.  She’s the pen name of author Shiloh Walker and was created basically because Shiloh writes like a hyperactive bunny and an intervention was necessary.  J.C. is the intervention.  The name… J.C. Daniels is a play off of the three people who pretty much run Shiloh’s life.
Twitter | GoodReads | Website

The tour giveaway consists of a beautiful pair of blade earrings

The bag contains swag from RT, a couple of samplers, as well as a T-shirt and cap from Ellora’s Cave, The Vampire Shrink from Lynda Hilburn, The Wolf Gift from Anne Rice and Cowgirls Don’t Cry by Lorelei James.
The books and bag were picked up for giveaways at RT.

You’ll also get a copy of The Second Book of Grimm and Locked in Silence, from Shiloh Walker’s Grimm Series.
For disclaimer/contest info, please go here.
Entering means you’ve read/agreed to the disclaimer and rules.
a Rafflecopter giveaway

The earrings look great and the book sounds great! thanks for the giveaway.

Love Shiloh’s work! Currently reading Fragile and loving it. I like to switch around with the genres I read so I can completely understand why she needs to switch around on what she writes 😉

Great interview! Love the part about Nora Roberts 🙂
Thanks for the giveaway! I can’t wait to read this book!

bacchus76 at myself dot com

I love Shiloh. I’ll have to give her alter-ego a try.
Thanks for the interview and giveaway.

What a great giveaway!

What a wonderfu give-away!! Please enter me!!

Shiloh, do you know how to use a sword as part of your research?
Carin
mawmom(at)gmail(dot)com

Love your Hunter’s series, so I should also love this. Great earrings. Thx for giveaway.

This seems like a great series and one I want to look into as a potential future read. sdylion(at)gmail(dot)com

Wow, what a great giveaway!

Shiloh Walker is one of my fav authors

I look forward to reading this. And I love Shiloh Walker

Great interview, I thoroughly enjoyed reading it especially where you meet JAK and SEP…I think it’s so cool/amazing that one of your fav authors has read and enjoyed your work, to me that’s one of the best accolades an author can receive!

This book is getting so really good reviews. I planned on reading it anyway but the reviews have really impressed me. jepebATverizonDOTnet

My my, it feels like Xmas again with all these gifts! Awesome giveaway :))
minadecaro@hotmail.com

Well, I love shiloh’s books, so I’m sure I’ll love J.C.’s books! Can’t wait to check it out. This is an awesome giveaway. Thanks for the chance.

I love the ear rings. Thanks for the chance to win them.

Love the title of the book! Sounds like a real kick ass type of heroine (my fav type!)

What a fun looking book and swag! Thanks for the giveaway!

I can’t wait to read it!