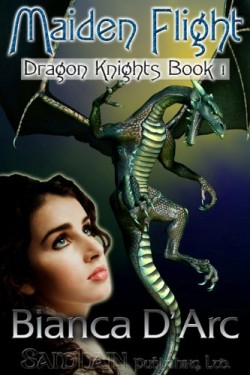 Bianca D’Arc takes readers into an alternate world where dragons exist. In this unique world, dragons are bounded to their knights in a way that makes them both experience what the other is feeling. When Bolera, a fair maiden goes out to hunt a stag for some food for her family, she comes across a huge dragon named Kelvan who tries to steal her latest game. As they argue over who made the kill, they decide to see Sir Gareth, the dragon’s knight to settle this matter.

Bolera and Sir Gareth experience an instant attraction to one another. Sometimes I felt that the dialogue between the characters was a tad bit cheesy, but this book does have a fairy tale feel to it. Their romance blooms, and soon Gareth wishes to make Bolera his for eternity. The mating rituals for the dragon knights are very different. Going into this book I knew there would be ménage in it, but in the first half of the book, the three major characters are Bolera, Sir Gareth and Kelvan, the dragon. For a second there, I thought she was going to have sex with the dragon! But no, fear not…there’s none of that in this book. 🙂

Essentially, if the bound goes right, Bolera, Sir Gareth and Lars will all be mated while still being connected to their newly mated dragons as well. Together, they make their own family. While complicated at first, this story was a very unique take on dragons. I don’t think I’ve read any dragon book so deliciously intricate.

There’s also a great introduction to the next book in the series, which will feature Bolera’s mother, Adora. Despite my initial hesitation about this series, I think I enjoy the world enough to read more about it!

Bianca enjoys mixing her real-world knowledge of science with imaginary worlds in her writing. A former chemist, she tends to mix genres, concentrating most of her writing in the paranormal, sci fi, fantasy and futuristic realms, with some contemporary and urban fantasy thrown in for fun

I love this series! I really hope she writes some more books in this series soon!

Thanks Maria and Timitra! This is a new sexy one I’m excited about!