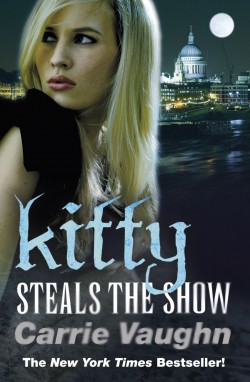 Original and action packed, with a lot of familiar faces that I loved seeing again!  Carrie Vaughn takes Kitty to London.  Why?  To participate in the First International Conference of Paranatural Studies.  Along for the ride are Ben and Cormac, of course.  And wherever Kitty goes, trouble arises.In between trying to attend some of the interesting lectures, being the keynote speaker for the conference (oh yeah, she still has to write that speech!) and sightseeing in wonderful London (she even gets to meet a vampire who was friends with Shakespeare), Kitty finds herself in the middle of a vampire war.  You guessed it, Roman.  He’s been the predominant bad guy in town and it seems that with each passing book he’s getting closer and closer to setting up a major disaster for the supernatural community.

New and old faces show up and this was one of my favorite things about this book.  I had a crush on Luiz when Kitty had a little fling with him around the second book in this series (I mean….he purrs!) and it was great to see him at the conference.  He even managed to get a reaction out of straight-laced Ben.  Yes, he was jealous.

So that brings me to Kitty and Ben.  I have grown accustomed to their relationship and it was a nice change to see some passion from Ben.  I do see him as the quiet type that has to go along with whatever trouble Kitty finds and sometimes just has to get her out.  But he showed some claws in this book.  I was very impressed with him and with the dynamic of his and Kitty’s marriage.  I am starting to see how they do work together, that they care about one another and that they are the perfect compliment to each other.

Then there’s Cormac.  It pains me to say this, I am still unhappy with how his character was changed.  But I did enjoy that he goes looking for Amelia’s old home and family.  Amelia being back in Britain after such a long time is not just concerned with how the country has changed, there is something she wants from her home and she finds living relatives of hers.  This was a bit bittersweet and maybe have even gotten a tear out of me.  Even though it took Cormac out of the picture for quite a bit of the book, which makes me unhappy.

I’ve gone through the ups and downs this series has brought for me.  I’ve learned to deal with the fact that the direction the series has gone in and the things that have happened may have not been what I wanted.  But even after all those things, Carrie Vaughn manages to write an entertaining story and characters that you enjoy reading about.  What’s to come next?  Well, with Kitty’s mind overflowing with conspiracy theories, you never know who she’ll try to go after next.

Thanks so much for the review. My copy arrived today. Can’t wait to read about Ben and Kitty. I have always liked Ben, even though he seems so passive at times.

Christina, hope you are enjoying it!

Maria, I would say this series is def best read in order although you could probably enjoy reading as standalone I think there’s so much background info going on in the world that it doesn’t do the books justice to pick up mid-series.

Timitra, thanks and hope you get to read it and enjoy it.

This series sounds great! I love finding and trying out new authors!

I picked this series up when I ran out of reads while on vacation. Enjoying the heck out of Kitty.