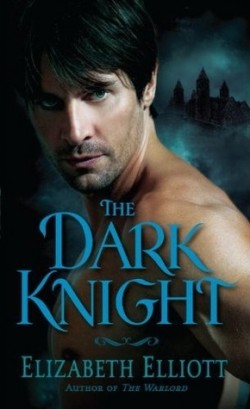 The Dark Knight
by Elizabeth Elliot

“ In his world, truth was an illusion built upon lies, a place where one wrong word, one wrong gesture could cost his life.”

Dante Chiavari is the king’s assassin. He is known as the most ruthless and coldhearted killer out there. His latest mission; to pose as a Sir Percival the Knight and kidnap Avalene de Forshay before she is married off to a family that will use her heritage to start war with the king. It was supposed to be a quick and easy job, but one look at Avalene and he became undone. And as the days go by he knows for sure that he would do anything to keep her in his life. But how long can he continue this charade?

Avalene has been primed and readied to be a fit wife. But when she literally falls into the arms of Sir Percival, her body and heart decide a different path for her. Avalene’s inhibitions and reputation are put to the test as she falls deeper for Sir Percival. As the days go by she is hit with the truth of his identity and realizes that her life was in danger the whole time. Will she be able to trust the man that stole her heart even though he was sent to ruin her future?

Oh! Oh! Dante. Just saying that name makes me swoon! Bad Ass? Check. Hottie? Check. Total Romantic? Check. Check. How can you not love a man who says things to you like:

“Do you have no wish to indulge yourself just a little, to know what it is like to be kissed by a man who wants you regardless of your dowry, or family connections, or your marriage prospects? A man who wants you and nothing else?

“I will not surrender you to anyone………. I will never again allow anyone to take you from me.”

Or a man who will look your father in the eye and say this:

“Tis true, I am a murderer, a liar, and a thief. Tis equally true that I will use whatever monstrous talents I possess to keep your daughter at my side. You can take Avalene to a convent at the ends of the earth and I will find her and steal her away again. I will lie to God, himself, to free her. I will protect her with my life, and I will murder anyone who threatens her.”

And Avalene? She’s not so bad herself. She may be naïve in the art of love making, and she may have low self esteem, but what I really liked about her was how she had her own mind, and she made sure to let everyone know how she felt, regardless of how un-lady like she came across.

Why only 3 feathers then?