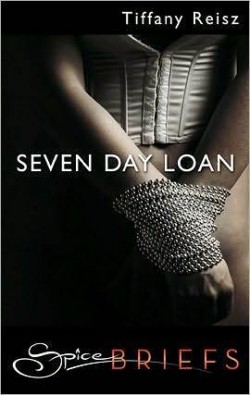 Eleanor is a perfectly trained submissive so when her Master decides to loan her to a friend, she does what is asked of her with little complaint. This is why she finds herself in a large house with an intriguing man.

A widower for 3 years, Daniel has been grieving over his wife’s death since then, never once escaping the confines of his home. However, the fact that he is still lost in grief does not mean that he has forgotten the pleasures of flesh or the words that make a submissive melt.

For seven days, Eleanor is his and Tiffany Reisz makes sure that those seven days are well spent. I don’t think this book is required reading to understand what happens in THE SIREN or in THE ANGEL, but it’s a nice bonus to an already addicting series. It’s as if Reisz knew I would require another hit so she gave us this short to pass the time until the next book comes out. I only wish it were longer.

I’m told that there are more freebies on Daniels on her website so I will be zooming to take a look at those before going on to the next short, LITTLE RED RIDING CROP.

Good review! I haven’t read this series so I’ll need to start with the first book.

Sounds delicious! I will be reading this soon. I didn’t know this was in Netgalley. Thanks for the review!

thank you for the chance at such a great giveaway and review. i haven’t read anything by this author yet but after reading this review i just put a bunch of books in my TBBN list and should have a busy weekend getting caught up. 😀

Thank you for introducing me to this author and series. I’ll will be sure to look for more!