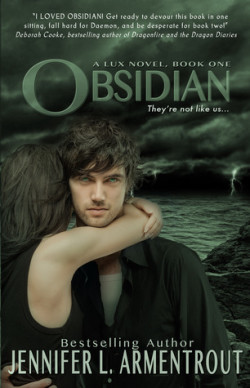 Although I haven’t read as many YA titles this year, I know that OBSIDIAN is a gem. First off, I want to thank Miss Vain from Miss Vain’s Paranormal Fantasy for recommending this book to me. She was livid about it, absolutely obsessed with the series and I wondered why. When she told me it was about aliens, I made a sour face because aliens just aren’t sexy. And I like sexy. But Miss Vain reassured me that Daemon and the rest of the Luxen weren’t your typical aliens and what do you know, she was right! I’m so glad I read this book because now I can ugly cry with Miss Vain until the next book in the series comes out.

When Katy moves to a new town, she immediately notices the hot guy next door. With otherworldly green eyes, dark tousled hair and a wicked grin, Daemon Black is the hottest thing to hit Katy’s retinas. But what she doesn’t know is that Daemon and his sister, Dee harbor a deadly little secret. And Daemon does everything in his power to keep that secret from being exposed to anyone.

Unfortunately, events lead to Katy and Dee becoming best friends and suddenly, Daemon is all up in Katy’s grill, warning her to back off and stay away from his sister. Now, I have to admit that I found Daemon to be a complete jerk to Katy. He says and does things to her that are humiliating and unforgivable, but Armentrout writes Daemon in such a way that you don’t want to immediately bitch slap him in the larynx for the things he does. The reason is because dangers lurk in every corner and as a being of light, a trace is left on humans if they have too much exposure to their kind. Daemon is just protecting his family, especially his sister Dee. So while a part of me wants to yell at him for being a jerkoff, another part of me can understand why he acts the way he does. In the prequel to the series, SHADOWS, you get to see the exact reason why he is protective of his kin.

Armentrout does a fantastic job with Daemon’s character. She is able to straddle the line, making him seem like a jerk one second, causing you to get red in the face with anger, but the next second, that redness turns into a blush because Daemon is a charmer. I have to give kudos to any author who is able to make me love and hate their hero in equal measures.

Speaking of loving characters, I have to mention just how much I adore Katy. As a seventeen year old, she is open-minded and smart, but just like any teen, she also wants to fit in. I loved that despite the fact that she was the victim of bullying, she didn’t stand down. She used that smart mouth on her and stood up for herself. I also love the fact that she held her ground against Daemon, who can be just a PITA. Another thing I loved about Katy is that she is a book blogger, so automatically she is in the cool club. Because, yeah, book bloggers are AWE-SOME. I’m not biased. At. All.

Some of you probably want to know how sexy this book is compared to others. Since it is YA, it’s not overly sexual, but Daemon is a stud and he oozes his sex appeal that is undeniable. There are a couple of hot and heavy scenes that would probably fog up the windows. So yeah, take that how you will.

The only thing I wished there was more of was the explanation of the Luxen and how they are able to manipulate light. The author explains it briefly, but I felt like she just said, “This is how it is and that is that.” But I guess if you’re a YA reader, you don’t care about the scientific stuff.

All the rumors you heard about her state aren’t true.

Well, mostly. When she's not hard at work writing, she spends her time, reading, working out, watching zombie movies, and pretending to write.

She is the author of the Covenant Series (Spencer Hill Press), the Lux Series (Entangled Teen), Don't Look Back (Disney/Hyperion) and a yet untitled novel (Disney/Hyperion), and new YA paranormal series with Harlequin Teen.

Jennifer also writes New Adult and Adult romance under the pen name J. Lynn. The Gamble Brothers Series (Tempting the Best Man/Tempting the Player) and Wait for You. Under her pen name, she is published with Entangled Brazen and HarperCollins.

Sounds really good-thanks for the heads up on this one Ann!

I think this is my most FAVORITE review of yours thus far SHOUTY capitals….maybe I’m biased because I like my name mentioned about our obsessive nerdy text messages about a dirty little bad boy alien…hehe.

Like you I’m not into aliens but the stills I’ve been seeing about the cover models, Pepe and Sztella, coupled with gushing reviews makes me want to pick the series up.

“But i guess if you’re a YA reader, you don’t care about the scientific stuff”

LMAO Aliens are ugly mofos. This is the first time I’ve seen or heard of one that isn’t an oompa loompa looking one. Thanks babe ;P

LOL omg Braine, i hope that last comment wasn’t insulting!!!! I didn’t mean for it to be. I just meant that no one would probably care about it. Oh god, LOL

Loved the review. This is one of my favorite books and I still re-read it, and I still love to read reviews for it Thanks!