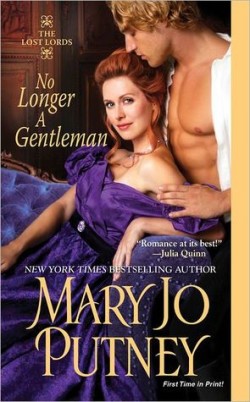 No Longer a Gentleman
by Mary Jo Putney

1803 France: After an indiscretion with a high-powered French politician’s wife, the privileged Grey Sommers, Lord Wyndham, finds himself in a private dungeon for ten long years. During his captivity, the English, Grey goes from the easy going golden boy to fighting for survival and his sanity in solitary confinement. His only distraction is a French priest that was captured and placed in the next cell, and that was two years after Grey had already been there.

1813: England:  Cassie Fox is a spy for England. During her life she has effectively lost all. Her English father and French mother along with her brother,were burned to death in the family home at the onset of the war. She had a short respite with a neighboring family but tragedy continued to mark this young lady’s life until she escaped and made her way back to England,  not as the young Baron’s daughter she once was, but as Cassie Fox, extraordinary female with the ability to make herself unnoticeable. Her goal in life is to destroy Napoleon’s Empire.

Cassie has been sent on a fact finding mission to France to investigate rumors that Grey Sommers is still alive. After so long with no word, the heir to the Wyndham title has been written off by many, but a select few still believe in their hearts that such a determined man could survive anything. Cassie’s ingenuity and her ability to blend in finds that Lord Wyndham is in fact alive and prisoner in Castle Durand. When she finds the chance in a million to actually free Grey, she takes it, escaping with the unrecognizable Lord Wyndham and the priest who kept him company.

After leaving the priest with his family, Cassie and Grey embark on their escape from France. Grey, having been without outside contact in ten years clings to Cassie as his lifeline and his warmth. Along the way Cassie and Grey slip into an affair not easily defined. One of mutual desire and mutual need, but Cassie is holding back Once returned to England, Grey is loathe to jump back into society. He finds masses of people terrify him and only Cassie’s presence can calm him. He wanted to delay a family reunion until he looked more like his former self than a captive, but news from home changes that.

Once returned to the family fold, will Grey be able to take up his mantle as heir? Will be he able to live his life without his lifeline? Does he even want to? Will Grey be able to cast off the terrors that return to haunt him? Read No Longer a Gentleman by Mary Jo Putney to find out.

Surprisingly, No Longer a Gentleman was my first Mary Jo Putney book. It definitely will not be the last as this is the fourth in ” The Lost Lords ” series and I am rushing back to read book one. Cassie’s character as the English spy is an awesome one. Plain to all see her, she has just something attractive and strong about her that makes her one of my new favorite females. Grey is not your typical Lordling either. His ten years in captivity has made him pensive and deeper than any male of his time would be. He is a great character, honest with his feelings. I didn’t put down the book once Cassie freed Grey and I suspect you won’t either. I highly recommend this read.

I have this book sitting in my TBR pile. I read the first 3 books in the series and loved them. However, that was a while ago so I many have to read them again before I start this one.

Not a bad way to spend the weekend!

Great review! I have to admit I’ve never read anything by Mary Jo Putney but it looks like I need to add her to my list of new authors to try. Thanks for sharing

I have not read any books in this series but it seems that I have been missing something great! I will seek these books out! landrybreaux@yahoo.com

I had never read a book by Mary Jo either! Thanks for the comments! I hope you enjoy!!!