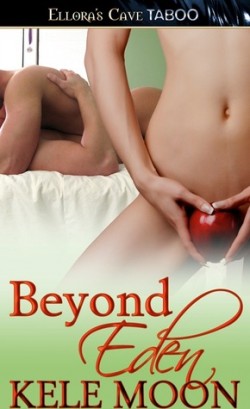 Beyond Eden
by Kele Moon

I must have been a fool to have not read this book sooner. BEYOND EDEN has all the things I want in a book. It has multifaceted and believable characters, engaging writing and scorching panty-melting sex scenes.

At eighteen, Paul and Eve fell in love. But when Eve goes to New York to pursue schooling, the straight-laced Paul allows her to walk out of her life. Years later, Eve loses her job, her home, and her fiancé and finds herself back living with her parents until she can figure out what she wants to do next. Stumbling into Danny, Paul’s best friend one day in a grocery store, Eve feels as if her past is catching up with her again. She agrees to visit Danny at his home where he and Paul remain best friends and now roommates.

Eve, Paul and Danny are such an interesting bunch of characters. I love how Kele Moon is able to create such multifaceted personalities. Each of them are so different from one another, yet they complement each other well.

Paul is one of my favorite characters because despite his work as a lawyer and his effort to please his father, Paul also has a secret that only Danny knows. Paul likes pain. It’s more than just the whip of the flogger or a hard spanking, he needs pain with his sex and only his Master Danny can give him that. So while Paul pretends to be this responsible guy outside of the bedroom, readers get a chance to see him come loose with Danny. I’m not always a huge fan of the Master/slave relationship but when done right, I can come to appreciate it. There have been only two instances where I enjoyed this kind of relationship and BEYOND EDEN has become the third. I loved Paul and Danny together.

Danny, on the other hand, is far mother freer with his sexuality than Paul. But despite this easy-going facade Danny places for the public, Danny is deeply emotional and vulnerable at the same time. Readers see two sides of him. The sometimes cruel Master, ready to manipulate you and also the reluctant Dom who feels conflicting over the pain he is able to inflict on his sub. Ms. Moon does a great job of straddling this line, keeping me utterly captivating.

Eve is similar to Danny in that she is free-spirited and easy-going. I think it’s why they work so well together. Ms. Moon is able to create a realistic love triangle between Paul, Danny and Eve with what seems like little effort. With an abundance of scorching sex scenes, you can really see their chemistry sizzle. There’s no doubt that the emotional aspect of the story heightens that chemistry.

I’m expecting a re-read very soon. Like, perhaps right now! I just can’t over how much I adore this book! Kele Moon has to be one of my new auto-buy authors! I’ve enjoyed everything she’s done so far.

I’ve been kind of on the fence about picking this one up, I’m not usually a fan of love triangles…but I think you convinced me with this review 🙂

Good review! I’m not big on romantic love triangles but this one sounds like it actually works well and helps drive the story along.

I have had this book on my Tbr pile for quite a while now. Looks like it’s going on to my ASAP read 
Thanks for the the riminder and the great review!!

Have this book on my TBR list, after you review I think I will have to move it to the top.

I’ve been wanting to read this book since I enjoy Kele’s books, thanks for the review!