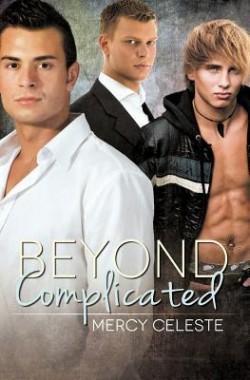 Beyond Complicated
by Mercy Celeste

I am truly conflicted and torn while writing this review. I believe this story has the wrong title, it shouldn’t be called Beyond Complicated, just Beyond F*cked Up. It took me on a ride I did not expect and to places (a lot of them) that I didn’t think I’d be comfortable going. I still don’t know exactly how I feel about it.Where do I start? How about my decision to pick up this book. I am a fan of this author and I read a guest blog of hers that mentioned this book had been banned from Amazon. I HAD TO HAVE IT.

Of course by reading the blurb you expect a lot of complicated and even some fucked up but I was unprepared for what I got. I think the author did a really good job at writing about things that are considered taboo and going places that others would definitely be scared of. I wasn’t completely repelled immediately as I would’ve imagined so I think it’s a good idea to look at this book with an open mind. That being said, this book is not for everyone as it has  many topics that can be triggers for some people, but it is a great emotional story about betrayal and love and everything that happens in between. It’s not about an easy life and it is a bit dysfunctional.  At times it felt like watching a Jerry Springer show without the eye-clawing and cat-fights.

Basically this story revolves around Liam. He’s been gay his whole life but at sixteen, the prom queen decided she wanted him and took his virginity. Few months later she told him she was pregnant with his child and that changed his life completely. To pay the child support he ended up in the gay porn industry, where he was very successful and met the love of his life, Seth. Or so he thought until something awful happened that turned his life upside down and brought it almost to an end. Now he’s back in his hometown and his son, Kel,  is dating his old boyfriend, Seth. But things get more complicated from there. And I have to say this more as a disclaimer so people don’t get surprised and can’t handle it, but not only does Liam get back with Seth when he shows up as Kel’s boyfriend, but Kel and Liam are in love and get involved as well. Don’t stop reading here. Leading up to this moment there were a lot of signs that Kel wasn’t really Liam’s son, however at the time they start being together Liam still believes that he’s Kels father and still has sex with him. I’m not sure how or even if I can explain it, that although it’s wrong it felt very natural for them to be together when they did (as a reader seeing the direction of the story) and their love was so strong it couldn’t have been any other way.However, like I said…this is not a book for the faint of heart. There’s talk of group rape, attempts of suicide, false paternity, incest (in a roundabout way), so much betrayal, and a m/m/m HEA. It’s not conventional, it’s not easy, and when I thought things were looking up I got hit with another big one and I was shaken up again (like at the end and the revelation of Kel’s father).

After so much all of them had to go through, I couldn’t help but root for their HEA because they deserved it after they had so much heartache to deal with. It was very hot but extremely hard and sad at times to read. And yeah, I still really don’t know how to feel about it all.

This does sound like a complicated read but the review made it seem that it will be worth the effort to do so. I will be putting this on my TBR list. Thanks for the review.