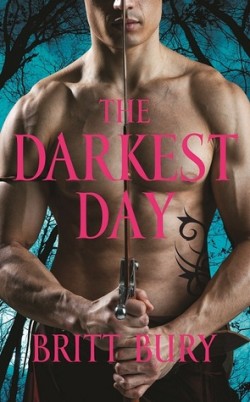 The Darkest Day
by Britt Bury

THE DARKEST DAY is the first book of a new series called the Immortal Heat. I love warrior men with accents so I thought I would give this one a try. Here are my thoughts on it:

WHAT I LIKED ABOUT THIS BOOK:

-The best part of this book for me is the spunky heroine, Izel Campbell. Izel was grown up to believe that she is an immortal Fionn, however when she goes to Scotland, she learns that she is actually the last living human in the world. I really enjoyed Izel’s character. She was spunky and funny and also very strong under the circumstances she was put through.

– There is a good amount of humor in this book that I thoroughly enjoyed. It made the reading fun and never tedious and there were times when I laughed out loud. I love it when a book does that.

-Along the same lines as the humor of this book, I found that the dialogue between Izel and Kelvin to be very entertaining. I loved their banter and the way Kelvin spoke as if Izel knew who he was and what his place in the clan meant. Izel keeps him on his toes .

– Kelvin is a fierce Pookah warrior. Unfortunately for me, the name ruins it all. I just think of beady-eyed kittens when I heard the word “Pookah” but that’s just how my head works.

– I did not like the fact that there was a drastic change in Izel’s appearance. I understand that she was disguised and then –surprise! – she was revealed, but it irks me when the description suddenly turns into one of a gorgeous woman. I didn’t think it was necessary to change her eye and hair color and the shape of her body completely.

– There is one scene in this book where the hero Kelvin tells Izel the ways of the Razorback warrior. On winter solstice and the days leading up to it, the warriors feel this animalistic urge to mate. However, in order for the warrior to recognize their true mate, they have to screw them. Sometimes they screw someone and they aren’t their true mate, so they go on to find another woman until they find the one they are supposed to be with. This caused me to raise an eyebrow. What irks me more is the fact that Kelvin says something along the way of, this is the way of the warriors. Accept it. This is how I felt most of the book is. The author states the mechanics of the world, but doesn’t really take the time to make readers BELIEVE it. It lacked that persuasion that some other books have. In countless instances, I found myself questioning why such a thing occurs, but in the end, there weren’t good enough explanations as to why. It just does and that’s that. I felt like the author was trying to sell something to me without telling me what I was buying. Unfortunately, I wasn’t buying any of it. I wished she took more time explaining WHY certain things occurred so that the worldbuilding was stronger. I just didn’t get that this time around.

Britt Bury writes paranormal romance where the immortals are fierce, the stakes are high, and desire can be deadly.
Britt was raised in Corvallis, Oregon and attended Oregon State University majoring in Liberal Studies. When her dream of being a professional karaoke star and Elvis impersonator didn’t pan out, she turned to writing. She currently lives in the Silicon Valley with her brilliant husband, two sons and an obscene amount of fish.

Good review! I look forward to your follow up review on the second book – your three dislikes are definitely worth holding off for:)

Thanks Maria! Yeah, I had to be honest in this review. But there were good parts too so it was a split!!