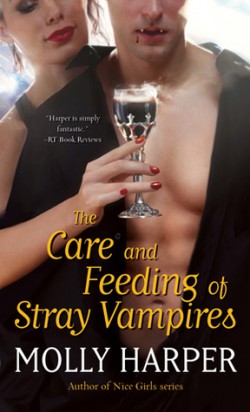 The Care and Feeding of Stray Vampires
by Molly Harper

Iris Scanlon runs a daylight help service for vampires, their every fickle, bizarre and obscure demand she patiently fulfills and asks no questions. It isn’t very glamourous but she fills a niche in the business of making money from vampires, and she sticks to a few very strict rules, like never meeting her vampire clients, never being in the vampire neighbourhood when the sun goes down and never inviting them to her home. Of course, after dripping over a poisoned (but very sexy) vampire named Cal who then demands she help him, she seems to be breaking all her own rules.

But as well as being funny it had a little action in it as well which upped the pace of the book and made it more exciting. Then their is the love story between Cal and Iris, which was pretty cute from their arguing and her giving him sass to their quieter moments and their hot sex-against-the-wall moments. Although it wasn’t the most deep and emotional connection I have ever read, it was fun and easy to read.

The Care and Feeding of Stray Vampires is a funny, romantic and well written book that I would definitely recommend, it is a perfect holiday read and works well with a cocktail (or two…or five)!

It sounds hilarious and I can always use the giggles. Thanks.

I think this one would be a fun read. Thanks for sharing your review!

Thanks for series recommendation Suz!

I love a book you can laugh out loud while reading!