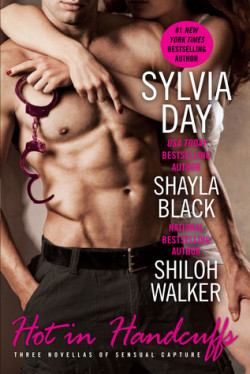 4 Feathers
I’m coming late to the Sexy Capers party.  This is a series by Shayla Black that I have NOT read.  Yes, I know, shocker!  And believe me, this is something I will have to remedy shortly.  But even, without having read the previous two books I had no problem getting into this story.  Jon Bocelli has apparently been working undercover in a mob operation until they were able to crack the case, but the mob boss died in the process and now Jon’s brother is in jail for that murder.  Jon has to go back now to find some proof that his brother is innocent.  And this will put him face to face with Lucia DiStefano, that mob boss’s youngest daughter and the object of his lust during his whole undercover work.  Not only will he have to ask for her help to save his brother, but he will have to deal with his feelings for her once and for all.  And they are hot and dirty!  Sexy cop + virgin mob princess = explosive heat!

On Fire by Sylvia Day

5 Feathers
I don’t even know where to begin with this story.  The title says it all.  End of review.  I’ve only read one other Shadow Stalker novella and it was verrrra hot as well but this one had smoke coming out of ears and sweat forming it was so hot.  A series of fires in local business are all hitting home for fire inspector Darcy Michaels.  When the crimes are too much for the small town cops to handle it, she calls in the cavalry and Deputy Marshal Jared Cameron and his partner are sent in to investigate.  And from page one when Jared met Darcy it was straight to the point “I want you, I’m going to have you”.  I love strong female heroines and that’s Darcy to a tee, but she has such a damaged past that it has made it easy for the wrong people to get close to her.  Jared is of course the alpha male that everyone dreams of having, in and out of the bedroom.  And even though I thought he would be overprotective and too macho to let her do her job and take care of her issues, he was perfect and gave her the space she needed and the opportunity to show that she can handle her own.  Only bad part is that I had the killer pegged from the beginning, but the rest of this story was so good that didn’t even take a star away!  On Fire had me burning up!

The Unwilling by Shiloh Walker

4 Feathers
Mica Greer is trying to catch a serial killer.  Her only hope right one is a retired FBI agent with a special psychic gift who just happened to be her partner and lover 15 years ago.  Colby rejects his gift for all the heartache it has brought him and how difficult it has made his life.  But when Mica shows back up in his life asking for help with catching this killer, he has to help her.  Whether its because its the right thing to do or because he never got over her and will do anything to be close to her again.  If there is one thing that Ms. Walker can do like very few people can is to write a villain that might just give me nightmares.  And oh the shudders I felt while being in the mind of this killer.  I have new and disturbing images to associate to an otherwise fun song in my head now.  Although this story has less heat than the rest, its still an amazing and suspenseful story that will have you glued to every word.  As it happens every time I read a book by Ms. Walker, once you start you are sucked in until you finish!  And along the way you will go on an emotional roller coaster along with the characters.  So great!

I haven’t read any of these authors yet but I’ve wanted to. This book would be perfect for someone like me. Thanks for the post!