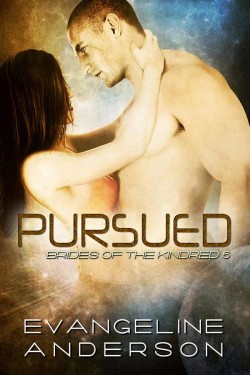 Ahhh, another Kindred book! I get so excited when I see there is new one out. These sexy aliens have got me tied in knots and begging the heavens for an alien abduction, Kindred style! These guys are perfec; big, strong with cocks that could be construed as deadly weapons and a powerful urge to give oral until his woman passes out… where can I sign up? And although Merrick wasn’t yout typical Kindred warrior as he is a very rare, dangerous and despised half breed between a Beast and Blood Kindred, I loved him, he had the sexiness of both the Kindred races. Elise feels the same, after saving and protecting her she can feel the bond between them, and despite a horrific past that she refuses to face she cherishes the bond. That is until they find out that the bond could kill them if they don’t get it dissolved, and the only way to dissolve it is to go on a very dangerous trek in a jungle populated by a race of ancient aliens. Let the fun times begin.

Since the end of Revealed I have been looking forward to Merrick and Elise’s book. They look like such opposites on the outside, Merrick so big and scarred and Elise petite and beautiful. But on the inside they are both the same, scarred and shutting out their past. They were perfect for eachother! What I liked was although they, ofcourse, had their Misunderstandings they never really tried to deny how they felt about eachother, and for the most part their relationship was intense, sexually charged and sweet.

This series is also developing a very interesting overarching plot, with Draven and his hoarde of grotesque beasts. I can’t wait to see what will happen next, and am torn between wanting someone to kick Draven’s arse and wanting someone to give him back his soul and redeem him. You also get to see the characters from the previous books, especially the women, and I seem to like them more now then I did in their own books! And also, when the hell is Olivia going to give birth, the poor girl has been pregnant for bloody ever!

Another great book in the installment, it was passsionate and emotional and I am now impatiently waiting for the next book.

Beast Kindred aka Fuckably Feral Aliens- Savage in battle these dark, brooding warriors from Rageron bring their passion and intensity to the bedroom. They possess a very special endowment that ensures every sexual experience is a tantric one.

Blood Kindred aka Space Vampire Aliens-Cold as ice to their enemies, these tall, blond warriors from Tranq Prime warm up when they find the right woman. But be careful…they bite.

Twin Kindred aka Menage a HOT Aliens- Muscular and rugged, these warriors from Twin Moons always come in pairs and cannot be separated. They experience physical pain when parted from each other…or the one woman they both choose to love.

I have the first of this series on my tbr list…need to get it read soon-great review!!

It’s like you read my mind. I just did a random Brides of Kindres search on Amazon not even 5 minutes ago to see if a new book is out and got all happy-faced seeing a new cover so I google it with your blog and VOILA! Review already! Best.book.blog.ever.

I have the first three books in this series on my eReader and I need to pick up the rest and go on a reading splurge! Great review!

Review: Enhanced by Evangeline Anderson | Under the Covers Book Blog