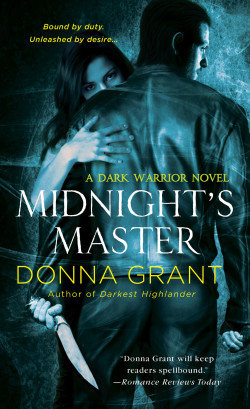 Donna Grant starts off the Dark Warriors series with a bang! With a swoon-worthy hero and a smart and steady heroine, there is no way this equation can go wrong.

In MIDNIGHT’S MASTER, we find Gwynn Austin on a hunt for her missing father. She travels to Scotland where her father was last seen, but can’t find any more supporting clues to his whereabouts. On that same day, Logan Hamilton travels from the past into the future to find Ian. As they both hunt for their missing persons, they find each other instead.

But that is not the only thing they find. The more time they spend together, the more Logan feels this telling magic surrounding him. It isn’t until later that he realizes that it is coming from Gwynn. Later, she finds out she is a Druid with the ability to hear the wind. And as more secrets unfold, more danger threatens to take over.

Fans of the Dark Swords series will have much reason to rejoice because this book has a similar feel to the past books. I loved how intricate the world is and can only imagine the amount of time and planning Grant spends on these books to make these stories flow as well as possible. Though this is the first book in a new series, there are familiar characters that play a huge role in this book and lots of backstory that enhances the plot. However, even if you haven’t read any of Grant’s previous books, I don’t think you would feel lost either. She does a good job of reminding loyal fans the details of the world as well as educating new readers on what has happened already. You can trust that you won’t be lost at all.

I like the way Grant builds her stories because though sometimes it can be slow in the beginning, she really pushes down on the pedal when it counts. The latter half of the book really interested me and I loved how involved the past characters were in this book. It showed this unity between the Warriors that I loved and seeing your favorites once again is always entertaining.

With a world that is sure to entice readers and have them begging for more, Donna Grant has me on my knees, waiting for the next thrilling installment in the Dark Warrior series. MIDNIGHT’S MASTER kept me up all night!

Love the review. Can’t wait to get stated on this new series. Thanks again.
Carol L
Lucky4750 (at) aol (dot) com

Pick It For Me Challenge: August 2018 - Under the Covers Book Blog