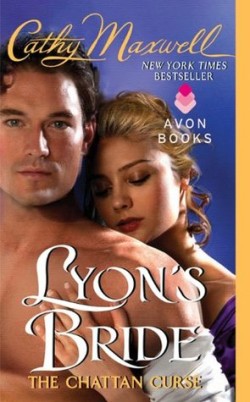 This is the first installment of the Chattan Curse series by Cathy Maxwell, and I must say, what a marvelous start! This book is *sigh* inducing and oh, so romantic. A great story of second chances and true love conquering all .Neal Chattan aka Lord Lyon and his family are cursed. The Chattan Curse is to punish and prevent any of them from falling in love. For generations, his ancestors have been attempting to avoid or stop the curse only to wind up with the same fate, death. Lyon’s brother and sister have made a pact that the curse will end with them, not continuing with their blood line. But Lyon has other plans.

Widowed with two young sons, Thea Martin has become the town’s successful match maker. Lord Lyon requested for her services but with specific requirements. Although Thea was against them, Thea accepts the job as her financial status has gone to a dwindle. The problem is Thea and Neal shared a past that will complicate their business arrangements.

I love second chances at love. Ms. Maxwell has given this couple a chance at a well deserved happiness despite their life struggles.

The world building was great and Ms Maxwell’s writing flowed. The character buildup was also good even for the secondary characters. Thea was a great heroine, a kick ass single mom who knew her priorities. And Neal the honorable hero who makes the right decision in the end. I love that their romance was done in good timing and being acquainted in the past, their love only needed to grow. Some parts of this book were totally cliche but every bit as heart warming.With that, I leave you with a quote:

“No woman had ever completely over powered him with desire. She was quicksilver and light. She was the stars, the moon, the sun. In this moment, she owned his entire being.”

I just got my first Cathy Maxwell book the other day, not this one but another one and I can’t wait to read it. Good review…I loved the favorite qoute.

Timitra and Maria, I have to admit that the cover didn’t encourage me to want to tead this book but when I started reading, I knew I was wrong to judge.
This book is a good one.
Maria, which one dis you get?!
~Angela

Timitra and Maria, I have to admit that the cover didn’t encourage me to want to tead this book but when I started reading, I knew I was wrong to judge.
This book is a good one.
Maria, which one dis you get?!
~Angela

Great job Angela! Now I don’t know what to start next, the book I’m listening to (The Winter Sea) is a bit of a Historical, maybe I’ll go to a paranormal and come back to this, but I will be listening for sure.
Girl did you see all the great releases on June 26?(audio) YES! a good month indeed 🙂

Hi Loupe,
thanks, yes, this is definitely a great one. Let me know what you think when you get to it.

what do you have on your audio releases?