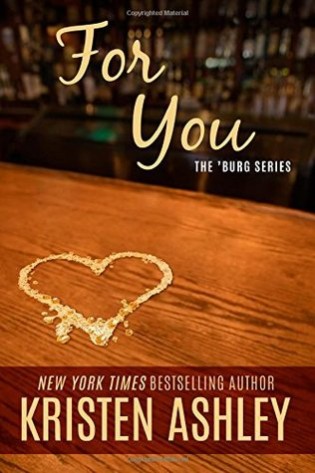 For You
by Kristen Ashley

Why didn’t I read this book sooner! Well, I think it was the cover, for some reason it freaks me out…I think it is because when I see the flower I think it is a spoon, and then I think eye gauging…then I feel a bit nauseous: it’s pretty much all downhill from there. BUT learn from my mistake, don’t avoid it! I promise there is no eye gauging AT ALL in this book! Instead we have a hatchet wielding mad man…

February Owens and Alexander Colton were meant to be together. They were highschool sweethearts and everyone agreed they were going to get married, have babies and live happily ever after. Except they didn’t. Now 20 years later Feb is back in town after 15 years of having left her small home town and Colt behind. But there is a mad man out there obsessed with February, and he keeps murdering people, and it looks like Colt might be on his list.

I love Kristen Ashley books, not just for her fabulous romances, hot alpha men and plucky women, they are also fantastic value for money! This book was long, and I felt like I really got into the characters lifes. Not just Feb and Colt’s but the whole towns, it was great and I was very sad to turn the last page, luckily I have some more to go in this series. Although the length of the story did mean although this was romance suspense, there was a lot more romance then suspense, I wasn’t particularly tense about the killer popping up, but been as I am all about the romance, to me it wasn’t a downside.

A great start to the series and I have already downloaded (and started reading) the next book! if you are Kristen Ashley fan, you have to read it, if you aren’t then don’t be put off the cover and read it, you are in for a sweet treat.

You are gonna love love the next book At Peace! Happy Reading!!

I have never heard of Kristen Ashley before. Must go and find her. I love romantic suspense.

Great review! Took your word for it and got it for my Kindle- and you are right – bargain priced for the number of pages

Glad you liked the review guys 🙂

I have finished the next book and OMG amandakgc you are absolutely right, I love it!

I hope you enjoy her books!