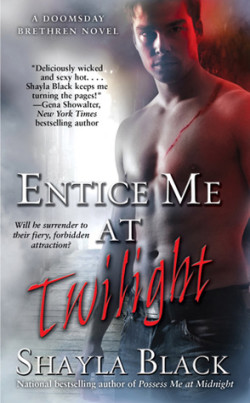 Entice Me at Twilight
by Shayla Black

This is the fourth installment of the Doomsday Brethren series and now the battle between the Brethren and Matthias is in full swing. He’s been holding nothing back and now wants more. And that more is that he wants to bring Morgana La Fey back to life.But to do that he will need a special piece of the puzzle. He needs an Untouchable. Those humans are rare, come once in many years, and render anyone with magical powers around them well…. powerless.

And it seems that the Brethren has found the untouchable for him. In the form of Duke’s mate. Oh but not just is she an untouchable and Matthias wants her for his evil schemes, she is also engaged to marry Duke’s brother.

In order to keep her safe and still keep his identity undercover, Duke just kidnaps Felicia the day of her wedding to his brother, and goes into hiding to keep her safe. Yeah, talk about family drama!

I have to be honest but Felicia was not my favorite heroine of this series. I felt that she could’ve been so much more being that she’s an untouchable and that she has the power of being a living lie detector. She could’ve been so cool, but for me she fell a bit flat. She had some hang ups about not wanting to fall in love because her own sister had fallen in love with a guy who broke her heart and pushed her to suicide. So now Felicia has closed herself off. That seemed a bit off for me. Maybe I was trying too much to make sense of it all.

Duke on the other hand was of course sexy, because well, all those warriors are just oh so hot. But other than the regular warrior sexiness, and the fact that Simon (because that’s actually his name) is really a Duke, I would’ve liked to have seen more of his suave persona.

I do see them as a good couple in the future as they can work together if we get to see more of them.

And have I mentioned this earlier? Bram has turned into a bit of a bastard! Please tell me he gets better. I want to cry and I miss his funny and joking, good natured self. What we discovered about Emma though was tough. I really can’t wait to read their story!!!!

“Us mere mortals need a bit of time to recover. You don’t?”
“Because we generate energy from sex, wizards are pretty much ready every moment of every day.”

“Hurstgrove, I’ve never, um …”
He froze and glared up at her. “It’s Simon. You’re going to say it. Scream it. Over and over as you come until you get it right.”

Thanks for another great review. I am so pushing these up in the TBR pile. 😉

Good review – I’m behind on this series so I’ll have to catch up to read this one:)