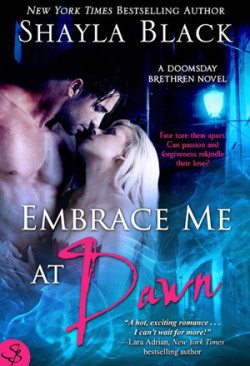 Embrace Me at Dawn
by Shayla Black

There’s been too much hearteache, too much history and too much pain for this to be an easy story.  I knew that.  I got that.  Lucan and Anka were happily mated for many years before this series started and then in the first book Matthias D’Arc took her from their home, raped her, forced her to do horrible things, broke her mate bond to Lucan.  She has been nothing but a shell for a long time since.

No, their path to a “finally-together-again” was not easy.  When Anka escaped Matthias she went to Shock, who had been her childhood friend and always in love with her throughout the years.  And Lucan had let her be with him.  I was so torn because as much as I love Lucan, I love Shock as well.  The only reason I’ve always been Team Lucan for Anka was the fact that I thought Shock was just fixated on her, and in a way that’s how I felt at the end of this book.  Yes there was a deep love for Anka, but not the mate love that goes deep in the hearts of these wizards.

So then there is Lucan.  Oh how my heart broke for him, not only for his present predicament, having his ex-mate not want him back and still loving her with all his heart.  But actually finding out that she was never who she truly was while they were mated.  She never truly opened up to him and let him in and only presented the version of herself that she thought he wanted to see.  That mated bliss they had so many years was not so.  And doesn’t that make the whole story so much more real.

Well now Anka’s past is coming to haunt her, she can no longer fit into the mold that she thinks would make Lucan happy.  And talk about self-doubt and low self esteem.  She was broken before Matthias even got to her, and then he just made it worst.  But she is now coming into her own and fighting back any way she can.

What can I say? Even though my heart was breaking for every single character involved in this story, I loved how Lucan and Anka got back together, how he is willing to be with her however she is, whatever she needs, even if that means tying her down, spanking her and sometimes giving her pain.

And then there is Bram.  I am happy to see a small change in him.  He might just be a little crazy like his ancestor Merlin, but he somehow has a great end in mind when he makes his decisions, even when they don’t seem to be the best.

I  think this might be the best book in the series by far!  I couldn’t put it down, even as it was breaking my heart and making me cry.

Not a lot of action in this one though, only towards the end.  I really don’t want to tell you about the main story and what’s going on with the war. Just know that Matthias is looking for an alliance with the Brethren against Morganna and now they may have bigger evils to fight.  They definitely need to step up their game.  I can’t wait see what Ms. Black has in store for us!

I love Lucan, I love Shock, I love Bram.  This book has plenty of my favorite men!!

PS: I wish Lucan’s visit to Club Dominion and Mitchell Thorpe would’ve been ehem documented in the book. Would’ve loved to see more of Thorpe!!!

Great review!!! It was also my favorite one so far. I agree, I cant wait to see what Shayle has in store for Bram and Shock. I’m Team Shock all the way. 2014 cant come fast enough!!!

Great review! I’m not up to this book in the series yet but I’m looking forward to it:)

@Janet, I loved Bram from the beginning even though I’ve resented his actions and decisions at times. But Shock pushes ALL MY BUTTONS! Heck yeah Team Shock!!!!

@Maria, hope you get to catch up soon, this one was the best so far!