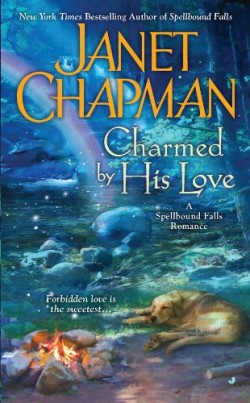 Charmed by His Love
by Janet Chapman

Peg Thompson has two priorties in her life, raise her 4 kids and to never fall in love again. Her family has a curse that killed all the men her female relatives marry to death by the age of 30, or within a few years of marriage, after having lost one husband, she isn’t about to risk someone else. Even Duncan MacKeage, no matter how strong he looks or how attracted she is.I love a Janet Chapman book, especially any that have a MacKeage or MacBain in them, or any of her other characters that have branched off her original Highlander series (which if you haven’t read, I highly recommend!) they always have a fantastic mix of a normal contemporary romance with a massive sexy Highlander shaped dose of the magical in it. This book was no exception, and with a mixture of sexy highlander, sassy woman, humour and a few cute kids generously sprinked in, it was a a really fun book.Duncan *dreamy sigh* he is very much on my Claimed shelf, he was a blend of sexy historical highlander and modern man, possessive, gruff but soft as marshmallow with those he loves. I mean, who can blame Peg for falling helplessly in love with him? I certainly did. And Peg was great as well, I love a strong heroine and she was definitely a fierce mama bear. This was very much demonstrated when she first met Duncan, in a scene which has to be the BEST first meeting between a hero and heroine…EVER, it was hilarious.

Although I haven’t read the first book, but I plan to as soon as possible, this looks like a great series from Janet Chapman, full of heart, humour and sweet romance.

I haven’t read anything by Janet Chapman…definitely adding her to my wishlist-thanks Suz!!!

I haven’t read any Janet Chapman books either but it sounds like I’ve been missing out. Thanks for the good review.