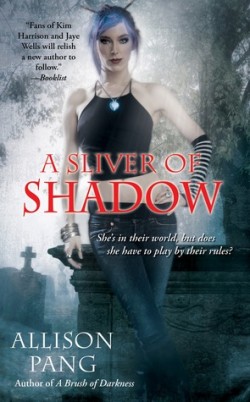 A Sliver of Shadow
by Allison Pang

Ms. Pang got me addicted to the main characters as well as plot in this series. I just cannot get enough of the humor, the action, the snarky comments, sexual innuendos, and the frustrating yet alluring love triangle in this book. I could not put this book down.

This installment takes off about six months after the last book had ended. Abby Sinclair is Touchstone to Moira, Fae Princess and Protectorate of this world. She has left Abby to fend for herself yet again. My reaction was…What? Again? …Apparently, yes.

But this time, she is left with a bodyguard, Talivar (Moira’s Prince brother) and Benjamin, Moira’s son to take care of.

During Moira’s absence, Abby continues to take over the protectorate issues, storefront, hone her powers with Brystion’s sister and take care of Benjamin.

Everything well and dandy until a Fae woman shows up claiming to be Moira’s replacement and hell breaks lose. A betrayal and revenge plot strong in the air but bottom line is there is a war brewing between the Dark and Light Fae that will affect all creatures in and out of the human world. Talivar and Abby work close together to find out what’s going on with Moira with hopes save the day.

I have to say, that Abby continues to be the strong willed and kindhearted heroine that she was from the last book. She does try to live her life after Brystion left and will get to know the honorable, crippled Prince, Talivar. And let me tell you, crippled Prince he is…but oh so very skilled. I actually didn’t think I would like him for Abby but he is handsome, kind, very sweet, took care of her and the sexual tension between them was very strong. And of course, the sexual innuendos between them made me laugh and giddy. I admit he may even be a good match for her.

That is until Brystion comes back. And man, I knew he would. He wouldn’t be able to stay away from her. Now, you want to talk sexual tension? Abby and Ion definitely has it. There’s
is definitely more to Brystion then meets the eye. Yeah, I’m still Team Brystion, no change there.

The ending left us with a big cliffhanger and I can barely handle the anticipation. But patience is a virtue and really, I have no choice until A Trace of Moonlight comes out late October. 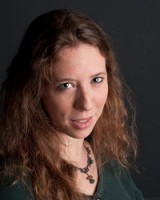 A marine biologist in a former life, Allison Pang turned to a life of crime to finance her wild spending habits and need to collect Faberge eggs. A cat thief of notable repute, she spends her days sleeping and nights scaling walls and wooing dancing boys….Well, at least the marine biology part is true. But she was taloned by a hawk once. She also loves Hello Kitty, sparkly shoes, and gorgeous violinists.

She spends her days in Northern Virginia working as a cube grunt and her nights waiting on her kids and cats, punctuated by the occasional husbandly serenade. Sometimes she even manages to write.

I like it! I just added this to my TBR yesterday, but after reading your review I might have to start sooner than I had planed.
Great review! Sounds just like the kind of book I enjoy, but I’m gonna have to take my time because big cliffhangers scare me, I promised myself to stay away from them after all I suffered with the Fever series.