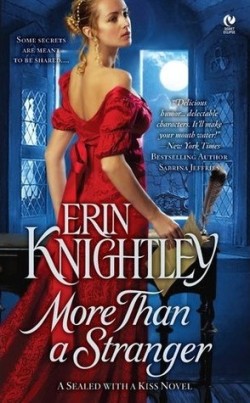 More Than a Stranger
by Erin Knightley

Erin Knightley’s debut regency novel, MORE THAN A STRANGER is a surprise waiting to be discovered by all. Immediately upon starting this book, I knew that I had found something special.

Knightley has a distinct and unique voice that I instantly noticed and loved. Her writing is natural, seeming to flow without much effort at all. From the start, her writing captured my attention and didn’t let go until the very end. In fact, it flowed so well that I didn’t feel as if I was reading at all. The heroine, Evelyn aka Evie Moore and the hero, Benedict Hastings have been long time friends. Despite the fact that they are separated as Hastings resides in Eton, Evie and Hastings still keep in contact through letters. These letters introduces the lovely friendship and most importantly the trust they have developed for one another. Though sometimes teasing and snarky, they reflect a blooming long distance relationship that remains strong until one day, Evie stops receiving these letters from Hastings. Naturally, she wonders what happened to Hastings but no word has been heard from him at all.

Later, Evie’s older brother, Richard and his best friend, Hastings return home but do not know that Richard’s family is there and in particular, Evie. It appears that Hastings wants to keep his identity a secret because when he stumbles upon Evie, he lies to her face, introducing himself as Mr. Benedict instead of Hastings. With Evie’s brother’s help, Hastings is able to keep his true identity a secret. However, Richard’s older younger sister soon finds out. The reason why Hastings wishes to keep his identity a secret is because he fears for Evie’s feelings. Their friendship ended, or rather had been stalled by his actions and he still feels terrible about it.

Normally, I would be angry at any hero who lies to the heroine. However, I couldn’t find myself being upset by his actions. This time, the deception is one that readers actually want the heroine to discover because we know how well they got along through the letters.

Knightley achieves great sexual tension between the hero and heroine. Evie cannot deny the physical attraction she has for Mr. Benedict. So though her body declares its need, Evie doesn’t act on them because her heart belongs to someone else. Or so she thinks…

Fans of Julia Quinn, Lisa Kleypas and Suzanne Enoch would enjoy this book in a new series. With Lord Raleigh’s book next, I can truly say that I am excited for it and Knightley has gained a new fan in me.

Good review! I love a good historical romance and this debut novel sounds like something right up my ally. Thanks for sharing