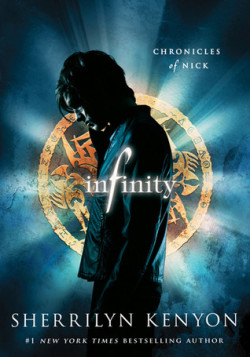 If you’ve read Kenyon’s Dark Hunter series, you’ll already be acquainted with Nick Gautier’s sarcastic, quick-witted, borderline annoying ways. He’s a kid who has a good grasp on who he is, but like all fourteen-year olds, he is still a little unsure of what is considered cool or not.

This is only my second YA read of 2012. But it is the first YA that I’ve enjoyed in awhile. I feel like because I read the Dark Hunter series first, that it only enhanced the reading experience of this book. You can definitely read this without having read the Dark Hunters, but it just seems easier to know Nick’s background before INFINITY. Ash and Kyrian make regular appearances. As does Nick’s mother, Cherise. Nick is always trying to get out of being grounded or suspended. But for a fourteen-year-old boy, he is a very well mannered one.

To spice things up, Kenyon introduces zombies into this series. I thought it was fresh and fun, and really fell into the trend in YA. Surprisingly, I was never bored while reading this book. I think that lies in Kenyon’s ability to keep the dialogue fun and never boring or repeating. Kenyon’s strength lies her ability to come up with witty comebacks. All in all, I enjoyed this YA a lot. Nick continues to be one of my favorite characters from the Dark Hunter series and I think I’ll continue with this series. Only more good things can come, right?

I just got this one. I’m glad to know that it’s got such a good strong connection to the Dark Hunter series.

I haven’t heard of this book before, i will check it a bit ( at least i’m not too late it’s the first tome^^;;)

I like to read YA every now and then…will add to my wishlist-thanks Ann!

Thanks, Sophia Rose! I hope you try these after DH!

LOL Miki, you’re not too late. But I think book 3 was recently released. I want to read that also.

Thanks Timitra, I have been slacking on my YA reads. Bad Annie.

Hi Ann! I don’t read YA much, but I am such a fan of the DH series and Nick that it is great to see him and the other in their past. The only thing that worries me is how she will integrate what Nick does in the CON to the DH series. He is messing with fire, LOL!

I really like this series. As a fan of the DH series & Nick’s character, I had to read these. I know you can read them without reading the DH books, but I definitely like it better, having already read about Nick & the other adult characters in the book. Just like you said, it does enhance the reading experience. Hope you enjoy the rest of the series! 🙂

Hey Laurie! I think SK does a good job of staying true to Nick’s character. Hope you give it a shot!

I think having read the DH books first, you get more excited about this one. Plus seeing the familiar faces is a bonus that I love. Thanks so much Amber!

Hi Ann, I guess I wasn’t clear, but I have read the first 2 books, gotta get to Infamous. I agree, that as a fan of the series it’s a bonus to see them in a different light.

LOL oh sorry Laurie 😛 I’m hoping to get the next books in the series to read them. Soon, i hope!

Nick is amazing character,Dark Hunter is my favorite series and I plan to read this series,I want to know more of the past of Nick 🙂