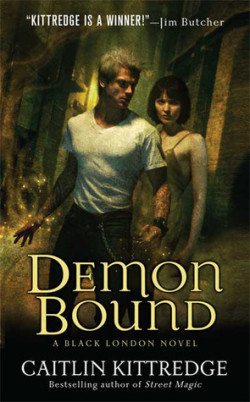 The story continues on from Street Magic the first book in the Black London series. Jack has been keeping secrets and this secret is about to come back on him after 13 years; his time is finally up and a demon has come to collect what is owed him. But Jack has found something to live for, someone who needs him and he won’t be dragged down to Hell without a fight.

I thought this book was brilliant, like the previous book it was dark and gritty with the magic of the Black like smog over the book. I really like how Kittredge portrays magic as dark, violent and treacherous, not a world you really want to get dragged into. The Black is like another character in the book, it hangs over everything and unless you can leash it, it leashes you, it felt like you were permanently walking over a tight rope just waiting for a malevolent gust of wind to knock you off. This is the sort of world that has shaped the main character of Jack Winter.

This book was told from Jacks POV so you get a closer look at his character and he is definitely a one. He is selfish, a liar, a murderer, a junkie, and a sarcastic sod with a foul mouth, but really you can’t help but like him as, although he is all those things he is also more complicated than that. His most redeemable feature being his protectiveness over Pete and the fact that you know he hasn’t fighting because he cares what happens to him, rather that he needs to stay alive so he can guard Pete and mentor her in the Black.

The story was fast paced and always left you on edge, you never knew quite what was going to happen and even to the very last page you weren’t assured a happily ever after, or even a happy-for-a–while-until-something-else-horrible–decides-to-kill-me. This was a dark urban-fantasy and I imagine that the next book Bone Gods will continue on in the same vein. But this book was again well written and in Kittredge’s distinctive style; very poetic and descriptive. She manages to get the feeling of an abstract concept/entity like the Black across very well and writes the characters and all their flaws and facets excellently.

I really like how this series this series is coming on and I can’t wait to read the third book Bone Gods as the story of Jack and Pete continues.

I really enjoy this series as well. .

Thanks, this sounds like something I would like! And told from a male POV would be interesting as well.