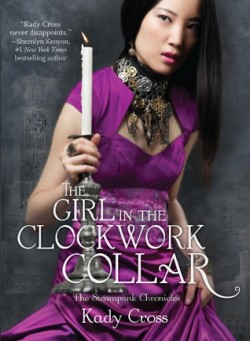 The Girl in the Clockwork Collar
by Kady Cross

Jasper Renn’s past has finally caught up with him. Leaving his friends in England he returns to America to face charges of murder. Instead he finds himself being taken to an old friend turned ruthless enemy, who is threatening the girl he loves unless he returns a device he stole from him. A device that could be very dangerous in criminal hands. But Finley, Griffin and the gang are close behind determined to get to the bottom of the murder charges and help their friend. But when Finley infilitrates the criminal’s gang Griff can’t help but worry if her dark side will stop her from returning…This was such a fun read. It had adventure, dastardly criminals and some fabulous dresses! I know the cover for this book isn’t as striking as The Girl in the Steel Corset, but don’t let that put you off, if anything I would say this book was slightly better.

I enjoyed this one a little more then the first one as I found the plot line a little more interesting, it was not only exciting but also gave us insight in to one of the characters, Jasper’s, past. And, although I had guessed some of the revealations fairly early on in the book, I was still eager to turn the page and see what happened.

One of the other reasons I was eagerly turning pages was the relationship between Finley and Griffin. Watching them work out their feelings about each other and watching Finley struggle with her choices as both sides of her personality are starting to entwine was as interesting as seeing what would happen next with Jasper. However, this book does have a little love triangle and I can’t wait to read the next book to see what the absent Jack has in store for them when they reach England again.

This was a great book, the characters are interesting and the plot was fast paced and I will definately be grabbing the next book when it comes out.

Great review! I’m definitely adding this series to my tbr ….Thanks for sharing

I am slowly getting drawn more and more into this sub genre, I will add this to my TBR =)

Thanks for the great review! Definitely adding this book to my wishlist 🙂

I read a lot of YA. I often get annoyed by the lack of character development. It sounds like these books have a lot of character growth. I am really interested in reading them.

Awesome, awesome series so far. And the name Finley Jane, it’s a good thing I’m not pregnant as I just love that name.

I enjoyed the review. I’m glad to hear that you loved the book because I’m dying to read it.

Sounds like an awesome book!! Definitely going to have to check out this author!