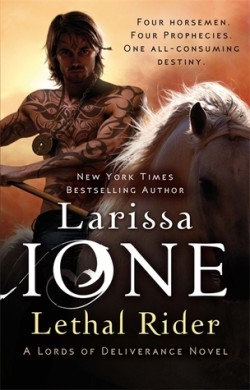 This has been a highly anticipated book for me. We are getting close to the Apocalypse, will they be able to prevent it or will all hell literally break loose?At the end of Immortal Rider Regan, a member of the Aegi, had volunteered to have sex with Thanatos and get pregnant. The whole thing went down with all kinds of betrayal and I couldn’t help but feel like beating Regan to a pulp by the end of that book.Lethal Rider starts eight and a half months later. Regan is very much pregnant and in the custody of the Aegis and Thanatos has been in a hellhound saliva induced frozen state for that whole time, not knowing Regan was pregnant. When the hellhound saliva wears off before it should and he’s able to escape and goes straight for that pull he has towards Regan, he finds it’s not just her, she’s carrying his child, so he kidnaps her to bring her to his home and keep her safe until she gives birth to his agimortus, or baby.I know some people are thinking “How could I be ok with her after what she did?” and I admit I felt a little bit like that but I understood her reasons why in this book perfectly. It’s her past, the way she views herself and her relations with others and her loyalty to maybe the wrong people. I thought it was great that Thanatos took his time getting past that and it wasn’t a magical “everything is ok now” moment. And of course, this is Thanatos we are talking about. Sexy bad boy, I just can’t get enough of him!What a rollercoaster of destruction and mayhem everywhere! The land down under has been taken over by hell, Pestilence is causing so much chaos everywhere, getting allies in all the wrong places, and destroying everything in his path.What can you expect? Some things are not what they seem, angels, Aegi and vampires will throw you for a loop. Seems like you can’t trust anyone! I loved seeing some of the past of Reseph’s life, it wasn’t much but it showed a caring side to him, and I admit I had to laugh at his music preferences! I feel this started setting him up as a character that we should like.

There are also some minor and major clues about the origin of the horsemen so watch out for the clues in this book, as well as more information about the daywalker vampires and Thanatos role in their existence.

There’s just enough of the secondary characters that I love. Kynan, Wraith, Shade, Eidolon, Conan, Limos, and even a bit of Arik. I can’t help but love that Ms. Ione keeps her old characters present and involved in her series.

So am I ready for Reseph now? Since I won’t tell you what happens in this book, then I can only say after this one, you’ll only want to get Rogue Rider that much faster!!!

Thanks for sharing your thoughts on this! I’m excited to read this myself and can’t wait to get my hands on a copy! 🙂

Good review! Makes me even more anxious to read my copy as soon as it gets here….

Don’t ask me why, but I refuse to read this series. I think it’s because I loved the Demonica series by her so much that I can’t imagine loving another by her….or maybe it’s that I don’t want these books to take its place. Lol I know, so stupid.

Anyway, fantastic review! After reading this review maybe I will give the books a try. After all, I’ve had two of them on my shelf for a long time now.

Have been waiting for this latest edition to the series.

I am so ready to read this book! It is one of my “must read” series!

Thanks for the great review!

I’m looking forward to reading this series…have the first and second books on my tbr!!!

I love it that there is the promise that we’ll just be more eager for the next one once we finish this one. Looking forward to it!

I have bookmarked this for later when I get caught up on this series, man, I need to get reading!!

I’m dying to get my hand on a copy!! Wonderful review as always!!
DeAnna Schultz

Haven’t read this series yet. Sounds like some fascinating and complicating world building going on. I’ve been missing something!